The first thing I need to say about My Name is A by Anonymous is that this movie needs a distributor -- now!!  I can't say enough good things about it.  It's powerful and moving and disturbing.  Credit goes to director Shane Ryan for creating a poetic view of troubled youth that doesn't incite fear or distrust, but rather moves the audience more towards contemplation and debate.

The other credit goes to the ensemble of young actresses who all delivered subtle but penetrating performances. Each of the talented young ladies developed their own unique image of misspent youth. Earlier I got to speak with Alex Damiano about the brutal honesty she delivered in her performance.  This time I got to speak with Demi Baumann, who plays The Sidekick to Katie Marsh as Alyssa (based on Alyssa Bustamante, the 15 year-old who strangled and stabbed her 9 year-old neighbor to death). It was Demi's performance as the aimless sidekick that demonstrated the disconnect that many teenagers have when their is no guidance or inspiration in their lives.  She's the good girl who meets up with the wrong friend.  It's Baumann's hardened, emotionless expression that quickly became most unsettling. She shows a lack of concern for her BFF's rebellious and dangerous behavior, but then suddenly a wide, Chesire grin would break across her face. It happened only rarely, but when it did, her pretty smile clearly showed the audience just who these kids really were... kids.  Innocent, naive, lost, desperate... kids. 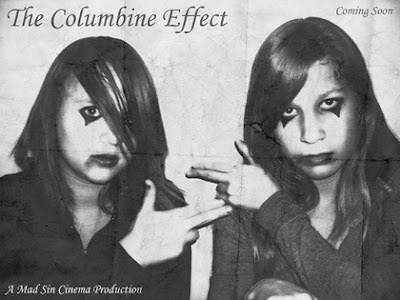 How did you first hear about this project, and about Shane?
I first heard about it through my friend Katie Marsh. She was auditioning for it, and was working with my mom who is an acting coach. Katie was cast and asked to film some candid scenes running around and I happened to be in one of them and Shane saw the footage and asked if I would be interested in being part of the project.

Were you at all familiar with the story of Alyssa Bustamante?
I wasn't until Katie started studying the videos. Since my role was not that essence of her, I didn't watch many. 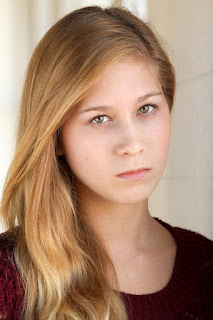 It was a courageous performance -- by you and all the girls. How did you (with Shane) develop your character, and was it difficult to try and relate to the character and her acts?
Thank you. Shane gave me the freedom to be this alternate personality as I felt it. Of course be part of murder is unfathomable and my personality had a disconnect. His made it more comfortable. The cutting was easier as I know a few people that do this and I have heard them talk about the mental pain.

How did this role compare to other acting jobs you've been involved in?
It is strange that I tend to play really dark characters. I seem to have this fierce mean look that I attribute to my Russian and Mongolian features. But I love these types of characters – I am more comfortable with these types of characters compared to bubble gum perky Disney type roles. This role was the toughest as it was a lot of improv. It was the most natural and raw feeling role for sure to date.

I see My Name is "A" as a true life crime story much less than it is a riveting coming of age story.  The end result (of murder) is the extreme of childhood troubles, but the other acts of cutting, eating disorders, depression... do you find these things more common or not.  Do you know or know of girls who act out like Alyssa did?
Here in Los Angeles you see so much. I have been exposed to all of those issues. Fortunately I haven't dealt with them personally. I think watching it around you, it can make you realize that bad path and helps you stay off of it. 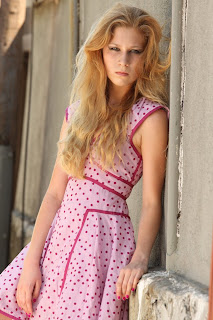 What was most challenging for you in this role?  And how did you overcome the challenges to deliver such a great performance?
Again I would have to say the improv and not breaking character in scenes with Katie when she gets a bit out of control because it was so against her true self.

I have to applaud you and the rest of the cast and crew for making such a difficult and powerful film.  Was the impact of this story evident when you read for it?  I mean, was it clear that this would not be just an exploitation of a true crime, but something more resonant?
I never saw a script. Each scene was attacked as an idea and we used our thoughts and ideas as those characters. We knew after the first scene, that this was going to be raw and edgy.

You're fairly young, and some of the emotions and acts in this film may be beyond your years -- how do you explain this film to others, when they ask about it?

I grew up around older actors and nothing really shocks or surprises me. People think I am much older than I am. I did not grow up sheltered from reality. I haven't seen the film yet – just scenes and trailers. After I watch it I will have clearer thoughts on it as a whole.

The film was shot in a style of a documentary -- this is probably much different than you were used to.  How was it working like this, and how was it like working with Shane?
Shane is a really nice guy and an actors director. He lets you explore and try. The style of filming as a documentary seemed in some ways easier and much quicker.

Your IMDB page shows you've been doing a good deal of acting.  Will you be going after bigger roles, with this on your resume?  What's next for you?
Well, pilot season is about to start so I will be back in the 'game'. I hit a growth spurt, which is never good for female actors, so it may be slow until I am 18 and I can play older roles. No one wants to hire a 15 year old to play 18 which is what I would play now. But I am okay with that, because I am doing a lot of ballet and modeling now too.
Posted by Bad Ronald at 5:14 PM

Email ThisBlogThis!Share to TwitterShare to FacebookShare to Pinterest
Labels: girls in film, my name is a by anonymous, shane ryan, WiHM, women in film, women in horror month