The Summer of 1977… That was the summer when everything changed.  After those few sunny, splendid summer months the movies were forever changed. Not only that, movie marketing changed.  Even the movie goers changed – a whole new generation of fanatics were born, sprung from the fertile imagination of one filmmaker.  A generation of fans so enthusiastic, so rabid that they would one day, and forever after, alter the way movies were brought to the screen (or not brought to the screen).  That was the summer of Star Wars.  And it was the worst thing that ever happened to me.
I can’t say that I hated Star Wars, ‘cause I didn’t, really.  It’s more like a kill-the-messenger kinda thing.  After that first outer space cowboy chase, or the iconic bzzwert of the light saber ©, I could see that filmmaking would become something different, pushing style over substance.    I saw the writing on the wall… or rather, the writing on the screen, scrolling off into space. I may have been just a 14 year-old kid from upstate NY, with only a couple short hairs in the armpit worth of life experience, but the one thing I definitely did know about was the movies.  I watched them since I was a squirrel nut.  Every day I was in front of the boob tube, watching something or other. I read about the movies, too.  I may not have seen all the movies that I knew about, but I read about them. I knew every player from Lillian Gish to Bogart to Burt Reynolds.  I even knew who the producers and directors were, and some of the writers, too.  Oscar night was up there with Christmas and Halloween on my list of days that I would enjoy the hell out of.
The movies that made an impact on my youth weren’t the usual kid fare, either.  Screw Disney. The hell with Benji.   Wizard of Oz was fine and good, but what really tweaked me was a clandestine viewing (on the Starz channel at some family friends house) of Rosemary’s Baby and Lina Wertmüller’s  The Seduction of Mimi .  These were the kind of movies I could really enjoy, filled with rich, deeply etched characters, and stories that seemed to unfold around you.  I really did love movies.  And, with all the hyperbole surrounding Star Wars —the figurines, the behind-the-scenes stories –  I can remember recognizing that the movies that I enjoyed, the stories and characters, were all in danger of being blown out of the universe like a Death Star.
What really drove this point home for me was the conundrum of another movie that came out that same summer.   William Friedkin’s Sorcerer.
You couldn’t find two movies more opposite each other than these two.  They were like chicken wings and caviar – not even on the same menu.    One was from the new kid on the block, unproven, but bold, the other from the old guard, trusted and respected.  And what was most telling was the treatment of these two directors and their films.  Lucas couldn’t have been more loved if Santa Claus himself made him newly in charge of Christmas.  He seemed to have the magic marketing touch, which pleased studio suits and the consumers nicely. Friedkin, on the other hand, a multi-Oscar winner, fresh off the success (and controversy) of The Exorcist and The French Connection, an auteur filmmaker deeply invested in the industry, couldn’t catch a break.  He’d thrilled people with his notorious car chases through the streets of NYC, and pissed people off with his blasphemous religious horror flick (to which they still seemed to swarm to), but with Sorcerer, everyone seemed to shun him. 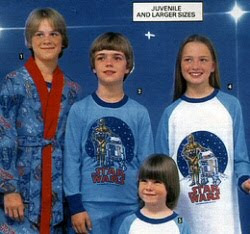 So, while every other kid across the country – and many a man-child, too – were crawling out of their Star Wars bed sheets to go to their umpteenth viewings of Princess Leah’s cinnamon rolls, I was, myself frequenting the local bijou.  I saw Sorcerer three times during the one week run at the Westmar Cinema, and I was mesmerized (and that may have been due to the hypnotic soundtrack by Tangerine Dream).  I was already a fan of Roy Scheider and his shark-battling, good-guy toughness, but geezus! that insane scene with the ten ton truck trying to make it’s way over a ramshackle rope bridge, as a driving rain storm rocked it from side to side – as the girls like to say these days… OMFG!
Let me try and capture the excitement for you.  We’re deep in the jungles of South America, the skies have opened up like the day Noah built his arc, and a band of fugitives are maneuvering through the trees in a fifty ton truck, carrying cases of volatile TNT which, if jostled just enough, could blow them all to China in tiny bits.  They’ve already lost one truck off a cliff-side dirt road, and endured everything from murderous bandits to fallen trees.  Now they’ve come upon a most insurmountable obstacle: a dilapidated, narrow rope bridge that spans a raging river.  The choice is there is no choice – they need to cross. So, Scheider takes the wheel, steering the five hundred ton behemoth over splintering boards and frayed rope.  The temptation would be to gun it, but that would mean certain death.  Shrewdly, and begrudgingly, he crosses slowly, inch by excruciating inch.  Co-hort Paco Raba has the treacherous task of guiding him, placing himself precariously seated on the wavering overpass. The truck trudges along, splintering boards, the wheels turning with painful precession, compensating for wind and fear.  The monsoon winds are so perilous that the truck doesn’t sway so much as swings widely, so widely that it comes within a degree of horizontal, tossing Paco around and threatening to spill everyone into the river.  The entire event takes only minutes of screen time, but gauging by the amount of sweat that’s soaked into the fabric of your theater seat, it feels like hours. 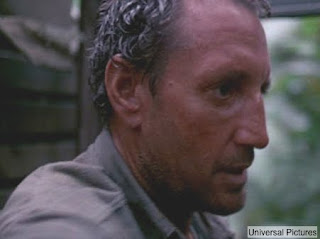 Had this scene been created by a team of tech-heads with computers, instead of filmed on location, the impact, the suspense would’ve never been as palpable. The beauty of it is that it’s all real – the truck, the bridge, the water, the motion, the peril.  There’s no CGI strings attached.  Sure, the action is controlled by stunt people, but the point is, it’s corporeal.  It’s organic.  You feel every ounce of sweat and fear, because the thing is happening before your eyes, not in some controlled digital dimension.
It’s this scene on the bridge that would proscribe my aversion to CGI or other big bang effects.  The thing is, that stuff doesn’t move me.  I can’t get revved up watching a pair of motorcycle dinks, speeding down a digital city street, bumping each other off the road. I don’t get blown away when Bruce Willis ducks down as two CGI’d cars narrowly miss him, flying over his head in perfect sync, because, to me, there’s no real danger.  The more real they make it look real, the less real it plays. 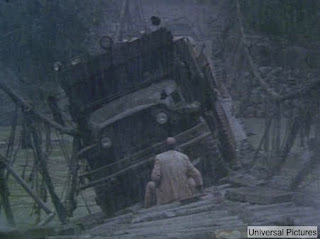 Hell, I’m a student of the Evel Knievel class of bone-breaking stunts.   So, knowing that they’ve spent three months  digitally maneuvering the hairs on an green ogre’s head to flop and flow like real natural hair—that ain’t filmmaking to me.  You think Friedkin stopped camera because he noticed that Scheider’s thinning hair wasn’t flitting about properly?  When did spending millions of dollars, and gallons of soy  lattes, on getting the topography of the ocean floor excruciatingly perfect,  so much so that it looks exactly like the real thing, become a part of story-telling? How did the exact replication of our daily minutia become filmmaking?
I know I’m being a royal buzzkill, but, for me, I go for the old school.  I like the clunky effects designed by craftsman – they’re real, they’re there.  They serve the actors well, ‘cause they have to react to them. CGI has it’s uses, no doubt, but when the emphasis centers on how the movie looks, instead of how it feels, the suspension of disbelief is about as stable as a suspended bridge with a five hundred ton truck on it.  The more real they make the images, the less real it becomes. It’s the imagination in a film that makes it real. 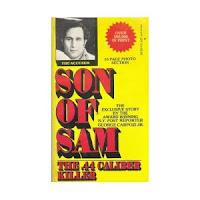 Oh, I did eventually see Star Wars, and I gotta say it was one of the most memorable nights of my life.  Seriously!  I remember it vividly, ‘cause I saw it in NYC with my oldest brother, on the very night that the Son of Sam was caught: August 10, 1977.  That occasion actually meant more to me than the movie did.  I mean, that’s just me.
Originally Printed in Penny Blood Magazine 2009
Posted by PopCereal at 10:23 AM