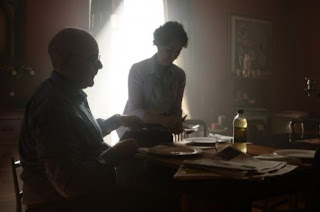 If you’ve had the pleasure – or rather, the extreme discomfort – of seeing Jeremiah Kipp’s THE CHRISTMAS PARTY, then you’re already tuned in on what to expect from a Jeremiah Kipp film.  There’s an element of the absurd and dupilicty that lies just beneath the sanity of everyday life.  In CHRISTMAS PARTY a young boy learns that things aren’t the least be as they seem.  And in Kipp’s latest short film CONTACT, an young couple out looking for thrills find that their idea of fun can lead to a world of Clive Barker-esque pain – not only for them, but for others.

In smoky black and whites tones, the film opens with an older couple setting the dining room table.  They lay out three settings, but their faces are tinged with sadness.  Is the third setting for a guest, or in memorium?  Then, suddenly, there is a gentle knock at the door.  This cuts to a young couple, in love and out for adventures of the dangerous kind.  They make their way through a maze of a ruined old stadium and the baleful looking souls who hang around inside, until they find who they were looking for.  Posed elegantly in the soft light, with a cigarette gently held in his hand, is the dealer (played by cult favorite Alan Rowe Kelly, who also co-produced the film).  Next to him is a table lined with medicine bottles and trays, looking more like a pharmacy that a drug den.  The man questions whether the couple is really prepared for what he offers, but the young woman (Zoe Daelman Chlanda) impresses upon the dealer that they are.  Once the couple returns to their place, it becomes apparent they aren’t ready at all for the full power of the drug they’ve taken.  Is it some Ecstasy like drug?  Or a hallucinogenic?  Whatever it is, the lovers’ mojo suddenly turns to horror – and bloody good gory horror, at that.

CONTACT could easily be labeled horror, for all the disturbing images and the overall content, but – like all good horror – the film goes much deeper than graphic imagery or psychological mind games. It questions what is important in one’s life.  Fun?  Self?  Duty? This is horror for all those who are weary of the mindless chills and thrills of SAW and the retro-remakes – it’s a thinking man’s horror flick.  Kipp knows how to play with the audiences wits, presenting the narrative in a manner that doesn’t feed the story, but rather employs the viewers senses.  Like with CHRISTMAS PARTY and POD, he poses questions and presents issues without flatly giving out or determining the answers, leaving it up to the viewer what they want to make of it all.
Posted by PopCereal at 12:22 PM