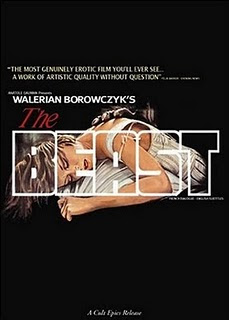 Once upon a time in the 18th century a mythical hairy beast is said to have roamed the dark woods of an aristocratic estate nestled in the French countryside. One day, the tale goes, this legendary giant beast (and that’s meant in a wink-wink kinda way), with an insatiable lust, sets upon the lady of the house, the beautiful young Romilda (Sirpa Lane in her notorious debut), corrupting her after she naively wanders into his dwellings.

Two centuries later, Lucy Broadhurst (Lisbeth Hummel), an American heiress betrothed to an impoverished male descendant of the once noble family, arrives at the old crumbling estate. After hearing the legend of the beast in the woods, Lucy is beset by terrifying, erotically charged dreams, which lead her to uncover the dark secret of the fabled beast.
The Beast is a notorious cult movie that is so wickedly vulgar, so wildly perverse, that you almost seem embarrassed for having seen it… almost. 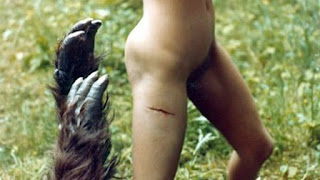 Walerian Borowczyk’s nefarious retelling of the oft told tale of Beauty and the Beast had been available only via heavily censored released versions or edited together pirated tapes, since it was notoriously banned for a quarter century. This banishment probably was due to the films morals-shattering glimpses of rape, boy-happy priests, copious faux ejaculate shots, masturbation with a rose, a wig, feet, and even a bed post, horse sex, bi-racial sex, death by sex, and most heinous of all - bestiality! (Well… implied bestiality, actually, which is made very apparent once you see that the “beast” is man in a Bigfoot/wolf outfit). But, by today’s standards,

The Beast’s subject matter may seem fairly tame in comparison (just check out the filthy adventures of Harold & Kumar, and the ejaculate and piss gags in American Pie), though still some of the content in this thirty-year-old film could cause you wince, or at least draw out a “what the…” comment from the most jaded film viewer. Borowczyk’s The Beast is all together vulgar, audacious, witty, provocative and even amusing. At times it’s an absurd sex farce, attuned to one of Benny Hill’s naughtier segments, while other times it’s a gothic horror tale pitting a nubile young woman against an unseen dark force, and even an allegorical fairy tale with ample symbolic imagery for those viewers who are hip to art references (Henry Fuseli’s Nightmare), literary cues (Voltaire), Freud’s dream analysis, and even Bigfoot sex flicks. To be more succinct, you’ve gotta see it to believe it.