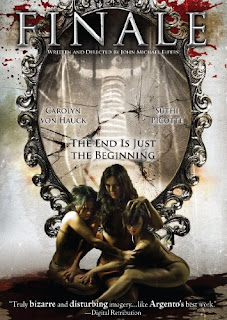 I haven't had this sensation very much, but once in a great while I watch a movie and find that when it's all over, I don't remember too much about it. Like I watched the whole thing in a void. Like 90 minutes of my life just went by and I was day dreaming or something.

I experienced just that very phenomenon with this movie.

I really can't say I hated Finale, or even that I disliked it much. But I obviously didn't enjoy it too much, either, seeing as I slept-walked through it. I can't say that it was a terrible movie either. It had its moments... usually with a lot of overindulgent performances and and peremptory direction. The literature that came with this DVD expounded quite a bit with high praised similarities to the Italian Giallo films, and in particular Dario Argento. I'm still trying to figure that one out. Maybe I'd throw it a bone by comparing it to, maybe, an Amicus film... maybe. And I only say that because, out of the two comparisons, Amicus would be the one more likely to feature scantily clad Devil-worshiping chicks. End of major horror brand comparisons. 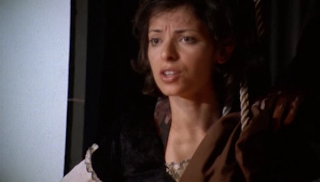 The one cognitive thought I recall having while watching Finale is that someone needs to give Suthi Picotte a role that she can really work with. As the sister of the young man at the center of the Satanic mystery, and the hypnotized sex slave of the lead in the play, and the frazzled daughter of an obsessed mother, Picotte was the one cast member who, as far as I could tell, pieced together and entire performance. She also reminded me a lot of actresses who turned up in 70s TV movies and TV shows -- and this a big plus in my book.

I'll give the filmmakers some credit for trying -- it sure looked like they were really working hard to put a decent picture together. Especially since they did it with a bare bones crew of about 8 or 9 people. I haven't seen a crew that small since first year at film school. Regardless, I would watch whatever they have coming next, because it's obvious that they have a vision. They just need to hunker down and focus.
Posted by PopCereal at 10:37 AM