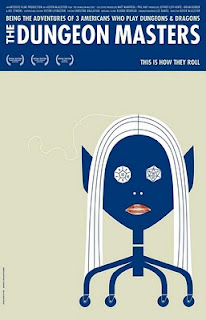 If you've seen TREKKIES, you've pretty much been introduced to this genre of documentary. DUNGEON MASTERS treks the same course -- traveling instead to a D&D convention, and then following three of the more interesting patrons.

As many of the D&D aficionados who attend these conventions and gaming events, Elizabeth likes to dress the part. That being an evil dark elf. All donned in black with striking white hair and elfen ears, she sweeps through the place like an evil fairy goth princess, turning the heads of many a smitten geek. Her full makeup and wardrobe are not only apropos for the venue, but is a nice analogy for her personal life. She moves from job to job, boyfriend to boyfriend, trying to come to terms with a terrible past experience.

Then there's Richard, the middle-aged military guy, who runs a mean game of D&D. His games are controversial, as he'll tell you himself, because the player's characters all seem to just up and die all at once. It turns out that Richard is a major D&D drama queen, and when the game doesn't go the way he wants, or the players don't domonstrate proper respect for their Dungeon Master, he'll suddenly put all players in a predicament in which it is virtually impossible for anyone to survive. The result -- everyone dies, gets pissed, and Richard packs up all his game epuipment and heads home, never to see any of them again. Again, as with Elizabeth, this D&D life mirror Richard's real life. He not only looks for ways to avoid his chores (there's a scary and hilarious scene where he tries to trim the high hedges with a chainsaw), but tells of how he had his ex-wife drive him to the airport, where he boarded a plane, never to return to her and her son. Like his D&D games, he packs up and leaves. Never to return (he does, however attempt to regroup with his estranged son, and some gamers who swore him off after an infamous year-long game crashed and burned).

Scott is the thoughtful, amusing artiste of the cast. He seems to have the most going for him, and turns out to be the lead nerd to root for. Not only is Scott an expert Dungeon Master, but a writer of fantasy who has earned interest from publishers. The ongoing plot is his dream of having his first novel on the bookshelves, and making a life for he and his family. Much of the humor of this doc comes with the segments featuring Scott. His stories of a nerdy childhood are often hilarious, and his struggles with his present nerdiness are insightful, as well as amusing -- not just to us, but to him. What's charming about Scott is that he can laugh at himself. Of course, he has struggles, too. He has cast himself as an outsider in life, and yearns to find a place where he is comfortable, and can be a good provider. His many years of creative writing seem to be his way out... or in, to the real world.

It would be easy to poke fun at people who dress in outrageous costumes and play games. But MASTERS Keven McAlester stays away from that. He presents this cast of characters as people with joys and sorrows and full lives, just like anyone else.
Posted by Bad Ronald at 9:07 AM