Rolling out from my grave to bring you a special Halloween alert.  Forget Sandy, or the Elections (I know, they're both awful frightening!), Malice: The Web Series is the big happening on Halloween.  Season Two premieres with a fantastic episode that expands the series in both technical and narrative ways.  If you haven't been watching, go give it a great big try.

To whet your appetite, here's an interview with Malice creator Philip Cook... 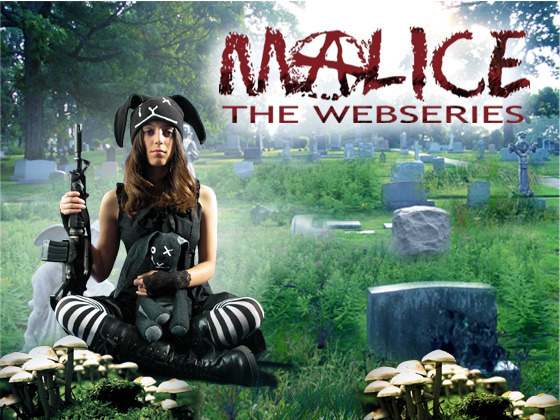 Can you give me a little background on you, and also a bit about the film community where you live and work?

Well … I’ve been knocking round a while.  In the 80s I worked on the first MTV Ids.
And animated rock videos for the Alan Parsons Project “Don’t Answer Me” as an animation cinematographer.

I had always wanted to make features so when the animation company I worked for moved to New York I stayed behind in Washington D.C. to direct my first feature the sci-fi film OUTERWORLDwhich debuted on the SyFy Channel the year they launched.

After that I directed another sci-fi thriller called INVADER which was broadcast on HBO, Showtime and Cinemax.  And then after that I made a direct to video feature DESPISER.  These were all micro-budget independent productions.  But they all got finished, made their money back and got distributed worldwide.

How did the concept of Malice begin?

Well I still wanted to produce stories yet it is so difficult to raise money for production.  In the 80s it was possible to make a no-star-name independent genre film and get it in a movie theater.  That day has passed.

In the 90s it was possible to make a no-star-name genre picture and get it on TV and cable.  That day has passed.

In 2000 it was possible to make a no-star-name genre picture and sell videos to 35,000 Blockbuster and 27,000 Hollywood video stores.  Well those stores are all gone now. 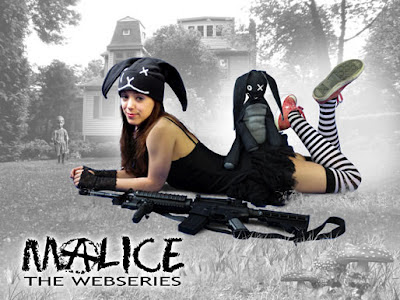 What was left?  The web.  Produce a web series and distribute it your self via YouTube or other means?  How does it work?  How do you monetize your efforts?  Interesting possibilities.  So I started researching web series and found most of them awful.  But then I found THE GUILD, which I loved.  You could see some rough production value in the early episodes but the writing and characters were brilliant.  I thought I could do this and bring some of my production and visual effects experience to bear.

I needed a containable story.  A hook.  A compelling character.  It had to be tightly paced and character driven.  It had to have visual effects.  So I thought … hmm … well I live in this interesting house.  What if it was haunted?  It wasn’t hard for me to hear the voices of Alice and Abbey come from anecdotes of my daily life with my two daughters.  I like swords.  Dad has swords.  We also have a bunny named Plot.  You get the idea.  But we have no Ghost Boy in our house.  I made him up.  But the eyeball in the garbage disposal?  That’s real.  Hmm.  Not really.

Your cast is terrific, but Brittany Martz seems like a one in a million find.  I understand you discovered her in a not so typical way. 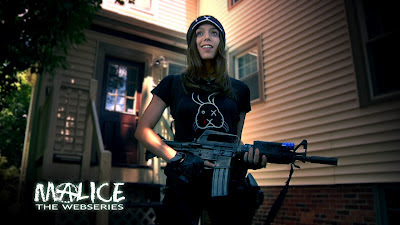 It was truly serendipity.  I spent months writing the scripts and getting them as tight as I could.  But I dragged my feet on producing the show.  I knew it was going to completely consume my life for a year.  And there was no point in going through all this effort if I couldn’t find brilliant actors.  It would live or die by its cast.  MALICE is a self-finance show so casting directors and the SAG (Screen Actors Guild) was out.  Being typical me I said I’ll find my own cast.  So I put out an ad on Craigslist, looking for young teen girls to be in a horror show.  Sounds creepy right?  But I crafted the ad very carefully -- listed my credits, links to my website and past productions.  The most remarkably talented young people started showing up for the casting call.  But when Brittany read the voice-over for me in her audition I was sold.  She had a lovely old-world-wise melancholy coming from such a young woman.  It’s funny because she wasn’t at all how I envisioned how Alice would look.  But she was simply amazing.  Now I can’t even see my original Alice -- it’s Brittany now.

How has it been working with Brittany, and the rest of the cast? 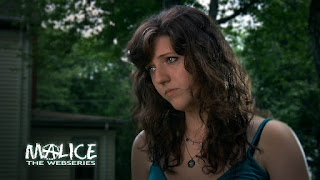 Brittany is wonderful.  Motivated, enthusiastic, committed, always thinking how the shot or scene is plugging into the story arc.  She really gets the process – wise like a veteran in that regard.  Frankly our whole cast was the most amenable group of people I have ever worked with.  I can honestly say we all had blast shooting MALICE.  We collectively all lived at my house for a month and made a horror show.  What could possibly be more fun then that?

The effects look pretty sweet, and the stories are great.  How tough is it to work all this magic into such a tight budget (and small crew)?

Well.  It’s hard.  MALICE’s crew was basically me as the Director/Director of Photography/Lighting Person and Art Director.  I had a wonderful committed young makeup artist Courtney Westphal who basically was my right hand on the set and I ended up crediting her as an Associate Producer.  And I had Max Heaton who just graduated from school was my Sound Recordist.  And of course my daughter Alexandra was Production Manager keeping us all straight on logistics.  That was it.  The whole gang.  Quite a few days it was just Brittany and I running around grabbing pickup shots or insert scenes – an army of one and the star!

What I find great about some of these webseries I've come across is the potential for them to go bigger.  You've now moved  beyond YouTube, right?
We’re on a couple of hosting sites right now.  YouTube, Blip.TV and most recently Koldcast.TV -- which has been remarkable.  They’re very selective of what they host on their site and they actively drive crazy amounts views.  So that’s very exciting expanding our audience. 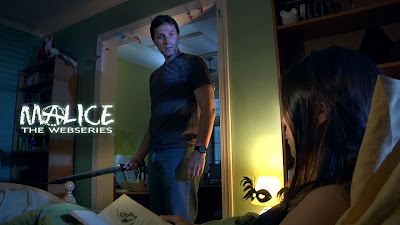 MALICE has tons of potential.  I simply love the dynamic of Alice, this diminutive young woman being thrown into these way-over-her-head situations that she has to resolve.  And it’s not because she a superhero or has superpower.  She just cares and does the best she can.  Some of it comes down to a mere survival struggle but the other part is finding a profound inner strength when you need it.  But in the end, Alice is just a kid trying to grow up.

Right now, you have a Kickstarter campaign, to raise funds to continue.  How tough is it to find support, being outside of the usual big production areas of NYC or LA.

It’s very hard.  We have started with nothing but a hundred pages of script and lots of committed young talented people that I never even know barely a year ago.  Yet we are managing to build a community around this show. MALICE is taking on a life of its own.  Fans all around the world are discovering the show and that is very exciting.  But I feel we are merely a hundred feet up the slope of Everest right now.  And it’s a five-mile hike to the summit.  But we’ll get there.  And it will be epic!


And how challenging has it been to build a fan base? 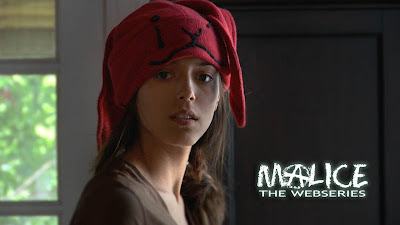 We’d love to go to Comic Con.  But it takes money and our production runs on two sticks and a Band-Aid.  Did I mention micro-budget?  Perhaps some day.  I know if I could get Abbey (Rebekkah Johnson) and Alice (Brittany Martz) in the lobby of Comic Con wearing Battle-BunnyT-shirts and black bunny hats passing out flyers that geeks would flock to them.  Guerilla marketing with a bunny twist!

Besides all the cool weaponry and kick ass qualities of Alice, you and Brittany have developed her to be quite a positive role model for young girls.  Not only does she handle the firepower like a boss, she uses her wit and brains to get through the messes.  Was this your original concept of your heroine?  Did Brittany help mold her with you?

All of what Alice is was carefully crafted in the script.  We really didn’t deviate barely a single word from what was written.  But what Brittany did was make you believe that Alice was real, sincere, threatened, vulnerable and brave.  She sold it.  It’s quite remarkable watching her say my lines and making me hear them as if for the first time.  That is a gift and she gave to MALICE for all of you to see. 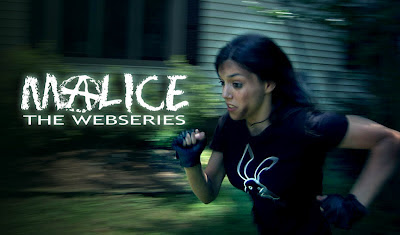 As far as Alice as a role model?  I think that’s cool.  In my view isn’t that why we want to hear and watch these stories?  To get some closure?  Take a journey?  Resolve something epic that we rarely witness in our regular lives?  Alice is a noble and tragic heroine making tough choices.  Her life is not going to be easy.

What do you have in store for Malice: The Webseries in its upcoming new season?  And secrets you can share?

In the interim we produced a special “MALICE in Space” episode that is completely out of context of the main story but features the same characters – Dad and Alice.  It was a pretty wild and intense promotion for a Space: 1999 convention coming up in L.A. in September. 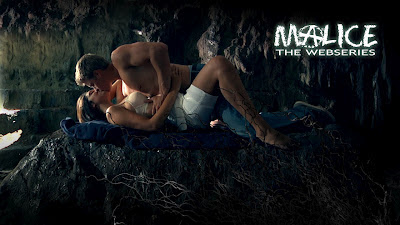 Consider it another of Alice’s “wild flights of fantasy.”

After that we continue our story with Episode-Seven, which really ups the ante concerning MALICE.  We see Alice and Abbey’s house party.  And as you can imagine it’s going to be a total disaster.  What ever is going on in that house starts to show up in a big way.  And then from there … it’s a roller coaster straight down the rabbit hole!

So, what are you waiting for?  Go check out Philip Cook's amazing webseries, and watch Brittany Martz kick some monster ass in Malice: The Webseries.

Click here to watch the new season on KoldCast!