Peephole Review: ATM is Out of Order

Sometimes you just wanna sit down for some mindless fun, and have some easy thrills and chills. And sometimes what you get is some mindless writing and directing. ATM is not a complete dud.  It had some moments (none of which I can particularly recall, at this moment), but everything gets unraveled by a ridiculously convoluted wrap-up ending. 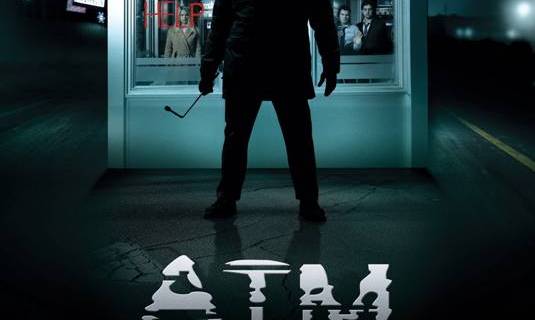 To the strains of Silent Night, an unidentified man peruses some blueprints and satellite Google maps, warming his toes with an electric space heater, as he plots out diagrams and angles.  The pre-credit action concludes with the man pulling on a black winter parka with a fuzzy snorkel hood. Cut to young upwardly mobile dude making his way to slag the phones at a big city financial firm.  As he trudges through the crowded streets, shots of crime scene tape and body bags zip past.  The tension is surely intended.

The young man finds himself in a pickle when he has to report to a client that he's wasted their investment away to nothing.  What's worse is that the co-worker he's been hopelessly pining over is leaving the firm.  His last chance to make any kind of contact with her is at the office Christmas party.  Naturally, his goofball buddy goads him on, reminding him of what a loser he is.  He finally manages enough backbone to offer the girl a ride home, only to be cackblocked by his goofball buddy.  Next thing he knows, he's at an ATM, getting cash out to pay for the third wheel's late night munchie attack.

Unwittingly, the trio of office workers have fallen into the icy web of the killer in a snorkel hood, locking themselves inside the ATM kiosk after seeing the ominous figure outside the doors. For the next hour is a cat-and-mouse game, as the hooded killer terrorizes the trio, preventing them from escaping, and brutally and mercilessly smashing anyone who tries to help.

The gimmick of people under attack (by wildlife or maniacs) in an isolated space has become a common in horror (Open Water, Frozen, Inside...), and really, the success depends upon how the filmmaker builds the tension. Director David Brooks and writer Chris Sparling do a fine job keeping the obstacles coming, and keeping them relatively believable (if not predictable).  But the unraveling all comes in the last moments of the film.

There's nothing worse than a horror/thriller movie where everything simply falls into place, just so, so that the end twist will work perfectly.  All the obstacles dropped in the way of the trio, like I said, worked within the context of the action. All the meticulous planning we saw at the open of the movie had paid off, and the killer worked all the physical angles to successfully trapped his prey. Cool!  Not only did the killer blueprint his attack, but he also relied on some common human fear, to manipulate his victims to do things they probably never would have done in their normal everyday lives.  Wow! A cunning and crafty killer at work -- how fun! This would have been a fine enough story, had the filmmakers left it at that.  But, they had to go add their clever twist.  A twist that fails the entire film.

The cunning and smart hunter not only manipulated the physical elements of his "game," AND has manipulated the actions of the prey... but the twist also finds the killer manipulating pure coincidence to target all blame for the violence surrounding the entire event fully onto the young finance worker.  This twist worked very well in Wolf Creek, frustrating the audiences who watched helplessly as the sole survivor of the Outback killer's torturous mayhem gets arrested and charged with the murders. It's a twist that works because of the tenuous relationships, the isolated setting, and the physical evidence and assumptions determined by the police.  Sparling and Brooks weren't confident enough to leave it up to that.  Too bad.  Instead, they convolute the young man's actions to coincide with the intervals of the timed recordings of the ATM security camera.  So, what they are asking us to believe is that the killer not only manipulates the friends, turning them on each other with fear, but that the camera miraculously only rolls when the guy 1.) accidentally shoves the girl to the floor. 2.) He grapples with his buddy, and then 3.)Grabs at the knife put into the chest of his friend, by the killer.  Not only that, the camera rolls on NOTHING but the violent actions of the young man. To the police, this is all the visual evidence they need to pin the crimes on the young man.  He's violent, he shoves his friends around, and he has the knife in his hand.  Case closed.  What a genius the killer is, that he can control fate, on top of all things.  But, could the killer have manipulated the ATM camera, you ask?  If he had, they didn't show it.  And that would've exonerated the young man, once they cops discovered that.

So, all in all, I can't recommend ATM.  The twist is nothing but a setup, and the plot and action never rise to the occasion.   You're better off getting your money out somewhere else -- this ATM is out of order.
Posted by Bad Ronald at 10:34 AM