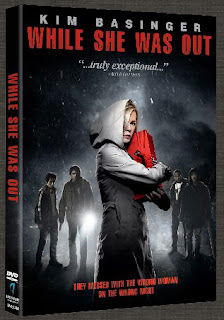 What do Christmas Eve and tool boxes have in common?  Usually, it means another gift for the handy poppa.  But on this occasion it means Kim Bassinger going nuts as a vengence hungry housewife in While She Was Out (2007 Anchor Bay)
Christmas Eve is hectic enough for a mother or two, with all the last minute preparations and shopping and spousal abuse – but the day that Della Myers (a wispy-haired exhausted Kim Bassinger) is just miserable. The story follows Della (with two L’s, she has to remind people), an upper-class mother of two, who is saddled with the holiday blues.  Her aggravated husband (Craig Scheffer) can’t seem to wake her up from her depressed daze.  He’s tired of coming home from the office to trip over toys and stacks of laundry.  He figures that if he yells and screams, and punches a hole in the wall, that might wake her up.  Doesn’t work.  Instead, the kids are terrified, and Della flakes out.
Della ends up at the mall, searching for a last minute present for the kids.  The mall is, of course, busy, and the parking is horrible.  She has to park in the way back lot, because some idiot took up a couple prime spots, just before she gets to them.  Not content to have the entire world shit on her, like her husband does, Della leaves a scathing note on the parking hog’s windshield.  This comes back to haunt her when she runs into the kids who own the car.  Della does her best to stand up for herself, but her newfound strength only makes matters worse for her.  Before she knows it, gunshots are fired, a person lay dead, and Della is on the run… with only a tool box in her hand (what she does with the tool box isn’t as prevalent as the press releases would make it seem).
While She Was Out may have been conceived as some kind of cautionary feminist play, and it does have its moments, like when Della finally draws the courage to stand up for herself in the mall parking lot, and is knocked right back into place – a quick allusion to the war of the sexes that have been going on for decades.  But mostly, the movie comes off more as a post girl-power revenge flick, sort of like I Spit on Your Grave meets Desperate Housewives, with loads of clichés winning out over cleverness.  There are endless scenes of Della narrowly escaping the clutches of the boys, by flipping a tree branch, or sliding a rock.  Yes, escapes can be set upon some plain good luck, but for Pete’s sake, how many times can a 50something gal escape a gang of viral young lads so inadvertently?  And when Della finally does get caught (in a very awkwardly played cat and mouse sequence)by the gang leader (played rather blandly by Lukas Haas), she uses her womanly ways to seduce him in a manner that will make you groan with embarrassment (talk about method acting!).  All of this works its way up to a twist ending (that you see coming a mile away) that makes you wonder – what’s the real point here? 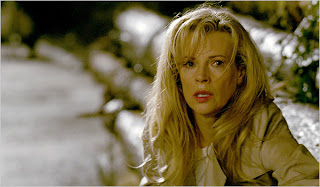 The performances are fine, however writer/director Susan Montford (basing her film on a short story by Edward Bryant) loses a lot of the power in the finer moments of the story while trying to beat the formula.  When Della finally takes charge, she does so with stingily excessive violence, becoming much too ecstatic with her role as slayer, so much so that she shows little regard for humanity, losing that motherly edge which helped her survive her own family troubles. The idea of the victim becoming the hunter is not an new one, and it’s good to see the twists become more twisted, but when the filmmaker looks to justify these excesses, it can get real dicey.   Is Della a hero at the end of the movie?  Or has she become a villain herself?  It’s a quandary which should’ve been explored more within the frame of the movie.
Posted by PopCereal at 9:53 AM

Email ThisBlogThis!Share to TwitterShare to FacebookShare to Pinterest
Labels: anchor bay, kim bassinger, review, while she was out