Netflix is at it again.  It's not so bad that they wanna raise their prices, but they're not just raising them -- they're screwing the customer!! 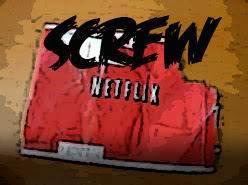 Remember that sweet plan that let you loan out one DVD at a time, while letting you watch as many movies from their streaming catalog as you could in a months time for a fair $9.99?  Say buh-bye to that!  Now they want you to pay a hike of 60% with their new plans -- $7.99 for just streaming, and then another $7.99 for just one DVD at a time.  Yup, that would be a mere 2 bucks less to get just one of the plans.  Together, they offer NO DISCOUNT -- $15.98 for the plan that used to cost $9.99.

And that's the not the worst part (well, it is really, but) -- have you taken a look at their streaming catalog?  For one, it pales in numbers, compatred to their DVD loan catalog.  So, the fact that both catalogs share the same price is hardly fair.  Second, go ahead and start watching that TV show you've always wanted to watch, via Netflix's streaming catalog.  Good show, huh?  Season One and Two were great, right?  Bet you can't wait to watch the other seasons, no?  Wait.... what?  They remaining seasons are only available via the DVD catalog?!  What dee fudge!!

Good enough reason to tell Netflix to go screw itself... speak out!!
Posted by Bad Ronald at 8:37 AM