Frozen... left out in the cold. 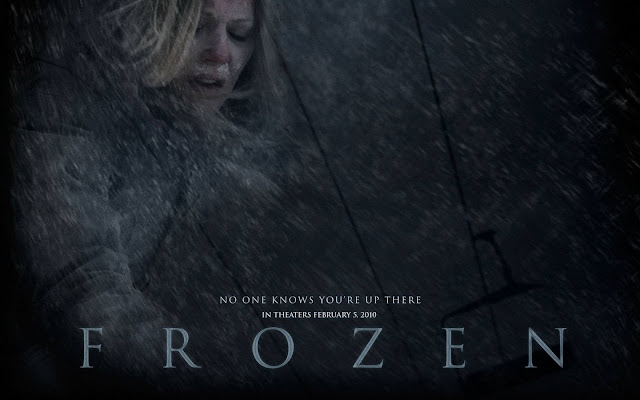 There's a shared phenomenon common amongst all who've either strapped on a board or snapped into skis -- and that's the stalled chairlift.  It could be that some doof fell trying to get on or off the lift, or some technical glitch.  Whatever it was, if you've ever visited the ski slopes, you know the feeling.  You're 30 feet in the air, your toes are getting numb, and their itching to angle down the slope -- the minutes seem endless waiting up there for the lift to continue up the hill.  But in Frozen, they're asking you to imagine what it's like to be, not just hung up for a few annoying moments, but stranded up in the air, lights shut off, patrons and staff all gone, and the resort shut down... for a week.  Now, that would be a real drag.

It's a terrific idea for a fright flick. Some of the best thrillers have taken place in such limited settings.  Rope, 12 Angry Men, Lifeboat, Cube. These films used the feeling of isolation, abandonment and entrapment to heighten the suspense.  In Frozen, three college age friends decide to take one last run down the mountain before the slopes shut down.  They convince the attendant to turn the lift back on, only to have it shut down by another attendant while the threesome is only halfway up.  Abandoned, the kids try to flag down an aloof snow groomer, stave of frostbite and a pack of hungry wolves.  But most of all, they try and contain the mounting jealousy and issues between themselves.
Like I said, it's a killer idea for a good film.  Only problem is, Frozen's director and writer Adam Green doesn't have near the talent of the makers of those other one-location films to pull off the gimmick.  It certainly isn't for lack of enthusiasm.  He and his fellow crew members speak of the film's premise with such excitement that you can feel their energy and passion for the project.  It's the same vibe they gave out with Green's previous genre flick Hatchet.  Green and co. touted that as the second coming of the 80s slasher flick, and promised that their bad guy would join the ranks of Freddy and Jason in horror film notoriousness.  That flick turned out to be a weak sppof of the real deals.  But again, you couldn't help but appreciate their enthusiasm.

Just as Hatchet was in love with being the "return of the slasher flick", Frozen is in love with the mere simplicity of its own predicament.  Unfortunately, the gimmick doesn't evolve into much more than just that.  The three main players aren't very interesting, and the predicaments they face are either overwrought or underplayed.  The effort is there, as Green attempts to make his characters more dimensional, and create tension through their tenuous relationships. But again, they're just ideas of what more evolved characters should be.  There's hints of tension between the friends, when one guy tries to bring back the old days, before his best bud had the girlfriend.  But it never plays out with any real emotion.  In fact, the entire first act comes off more as a teen comedy, with pranks and witty banter.  So when all those personal tensions finally explode later in the film, at a very crucial moment, the idea of an emotional avalanche turns out to be about as moving as a soggy snowball.

You can just see Green's list of gimmicks ticking off as you watch, but those ideas don't amount to anything that we can care about.  The guy putting the girl in a veritable headlock so she can't watch her lover being eaten by wolves. The girl's hand freezes to the safety bar as they sleep, and her flesh tears as she pulls it off.  But why doesn't she tell anyone about it?  And why didn't her injury have any effect on their fight for survival?  Why do they all just sit and whine about regrets instead of doing something to get the hell off the lift?

I understand that Green was trying to create a more inward tension with all the contemplative dialogue, and with the tense friendships issues.  And I appreciate that.  I love character studies, so I dig it when personal quirks and personality issues get in the way of things.  These characters are people, and people fail miserably at shit all the time.  But in the end, it's gotta mean something.  It's gotta draw the audience in on a real gut emotion level.  So, when the two remaining friends have a petty argument about whose fault it was that the third died in a failed rescue attempt, and who was the real friend and who wasn't, it's downright tedious.  Like much of the emotion in this film, it comes off as terribly forced. When the fallen guy is being eaten alive by the wolves, the other dude holds the girlfriend's head, preventing her from looking, and all we really hear is the two of them crying and sobbing.  This misses the mark by a mile!  This isn't a teenage love story.  It's a horror flick! Let's feel the flesh being ripped as well as the hearts being broken. (For a good laugh, check out the alternate edit of this sequence with the boyfriend screaming "Don't let her look!" as he's being eaten).

Outside of the attempts to capture our emotions, Green's imagination for frightening scenarios is as limited as the settings.  He spent his load trying to create inner turmoil, but did very little at creating outward suspense.  His idea of mounting tension is by having one of the guys talk about how he heard somewhere that the ski lift cables are sharper than knives, and... well, gee, I guess I'm supposed to be shocked when the other dude gets his gloves torn when he attempts to shimmy across one.  Green also dips into the killer-wolves well a whopping three times.  It barely worked once, so when the pack reappears, I couldn't help but wonder how many more times they'd be back.

I really do get disappointed when you come across these flicks that create buzz on the mere idea of the premise.  It really does take more than a gimmick to capture the audience.  And with such a strong gimmick as was in Frozen, I wish that Adam Green had the sense to hand off the premise to someone with more talent at storytelling.  I'd love to have seen Frozen as a nice taut white-knuckle ride.
Posted by Bad Ronald at 8:27 AM