Here we go again!  Another shark-buster washes ashore the SyFy Channel, with another washed-up celeb tied to it. 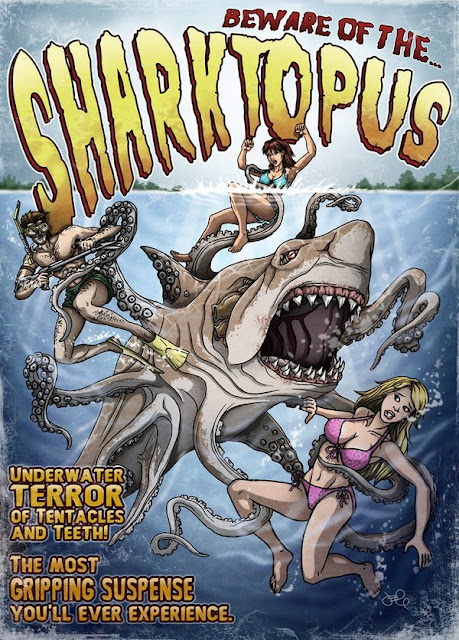 If you're not expecting much -- and, I believe that if you're turning to SyFy for your entertainment, you're not -- then you're in luck!  Sharktopus should delight you.

Like all their other (fallen) star-studded beast pics, this SyFy flick is filled with more cheese than a Pizza Hut stuffed crust pizza. This time around they've corralled Eric Roberts (do these guys' agents call SyFy to try and get their careers boosted. now that these beast-cheesers are so popular?) as the what-ever-happened-to? big name draw. Roberts plays a scientist who's created a shark/octopus monster mash-up for the Coast Guard-like folks to try and help them curb the offshore drug smugglers.  Naturally things go wrong and loads of people get squished and eaten by the behemoth beast.

I'm not gonna knock the acting on this small screen screamer, but I will say that in keeping with these SyFy cheapies, the acting is about as shabby as you can get.  The dialogue is just classic cheeseball ("They're just boobs. They're not gonna get up and dance or anything.") and the action is, especially the kills, designed to make you groan with utter guilty pleasure.  Of course, what would a beast blockbuster be without the babes and bikinis.
It's not gonna keep you out of the water, or in stitches.  But, it'll do for a couple laughs.
Posted by Bad Ronald at 1:43 PM