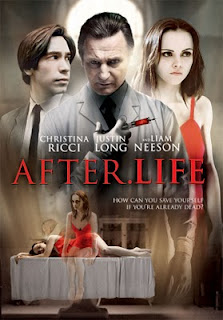 There's been a pleasant resurgence of genre flicks that have opted out of the once trendy twisty-turny-try-and-fool-ya plot gimmicks, and are delivering simpler stories that build suspense. The emphasis is a swing back to the story, and away from the storyteller.

But, let me welcome back another horror staple, a once prominent element of horror flicks that sadly went missing in the post-Scream era. Nudity!! It's returned in such a fashion that it's almost a movement. A revolution! Okay, yeah... some movies were a tad overzealous and blatant in their displays (the Friday the 13th and My Bloody Valentine remakes). But, either way... welcome home.

Afterall, what are we so uptight about, still? Nudity is on network TVs across the world, while we still giggle and peek (giggle giggle).

The story follows Anna (Ricci), a young woman unable to find the joys in life. Then suddenly-- she's dead. After a horrific car accident, she "wakes up" while Eliot the funeral director (Liam Neeson) is preparing her body for her own funeral. Anna is convinced that she's still alive, but Eliot explains that her confusion is not all that uncommon, and he's heard it many times form the bodies he's prepared over the years. Creepy, eh?

Well... the premise on paper if a lot creepier than the action in the film. It's not for the lack of the performances. Neeson is as good as he always is, giving the creepy mortician a shade of sorrow [it should be noted that filming had already wrapped on After.Life a few months prior to his wife Natasha Richardson's fatal ski accident, but her tragedy oddly resonates throughout the film and his performance]. Justin Long (on his quest to be in every movie ever made) plays Anna's grief-stricken boyfriend, with the standard long-faced confusion. But -- hello Christina Ricci!

It's difficult to judge a movie like After.Life, when the young starlet decides to parade around full frontal for the entire second act. Did I really enjoy the movie as a whole, or did I just enjoy watching Christina Ricci putting herself on display? The fact is, the nudity was a bit more enjoyable in the end.

The script was clean of overt cleverness, but it lacked genuine creepiness. Eliot's weirdness is already evident in the fact that he "speaks" to the dead. And the element of suspense lies in whether he is telling Anna the truth, that she is really dead and is not being held hostage. But, his wall of snapshots, cataloging the cast of bodies he's prepared and helped usher into the afterlife, is too deliberate and hokey. However, the relationship he broaches with a young student of Anna's (Chandler Canterbury), a budding ghost whisperer himself, seemed a more interesting avenue to exploring Eliot's character.

Director Agnieszka Wojtowicz-Vosloo (who also wrote the script with Paul Vosloo and Jakub Korolczuk) has an interesting style, using colors or word phrases as motifs. The environments in which Anna lives in, and where Eliot works, are sterile white, brightly lit, or shiny clean. Red is a symbol of death -- or is it life? These are the bits where the direction is solid. But, the building of suspense or mood-- and again, this may have just as much to do with his script -- is lacking.
Posted by Bad Ronald at 9:43 AM