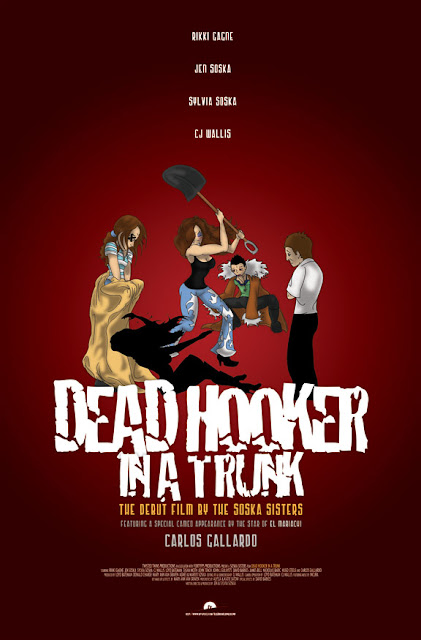 Finding a slaughterd hooker in your trunk -- Oh, but that could ruin a day, huh?  But not for the Soska Sisters.  No sir, these hot little doppelgangers turn such a sordid occasion into one helluva gut-busting action gore flick.  After seeing these sweet twins in action (they write, direct AND star) you'll be wondering why some of the boys are even bothering to pick up a camera. 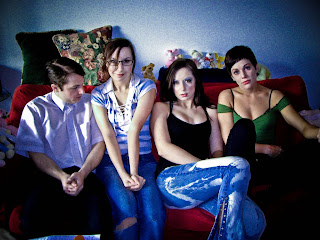 Grrl-icious Badass (Sylvia) and her twin sister, the those-glasses-can't-hide-the-sexy Geek (Jen) set out to run a few simple errands with their pals Junkie (Rikki Gange) and the Jesus loving Goody Two Shoes (CJ Wallis), but instead wind up on the wrong side of trouble when they discover the body of a dead hooker left in their trunk. While they try to get their shit squared away and figure out what to do with the corpse, they face off against persistent police, a sleazy motel manager, chainsaw wielding triads, and a brutal serial killer. And, the mysterious Cowboy Pimp.
Jen and Sylvia Soska have presented themselves as a force to be reckoned with.  They wrote, produced, directed and starred in this debut flick, and not only do they display an obvious love of the genre, but they had the, um... balls to tackle the task with a surprisingly intuitive eye for storytelling.  There's none of the usual fanboy worship you find so prevalent in these low budget eye-poppers.  There's no mindless odes to their favorite movies, no dry humping the same old cliches.  Instead, the Soska girls came to the game with their own ideas, and their own brand of fun. Seeing the Soska Sisters in action will answer that age old question of what would happen if Quentin Tarrantino were to mate with the Suicide Girls?  Dead Hooker in a Trunk is a gut busting grrl power trip.  And the Soska Sisters are on fire.
Posted by Bad Ronald at 8:00 PM