Continuing in my WiHM celebration, I hooked up with Nicole Kruex and got her take on what it's like to be a woman in the horror scene.  I was pleased to find out that we had so much in common... Like I had, she grew up worshipping the genre idols of the day, while also enjoying the more goody goody child friendly fare  Her juxtaposing tastes would later guide her through her burgeoning career in front of the camera... and now behind the camera. 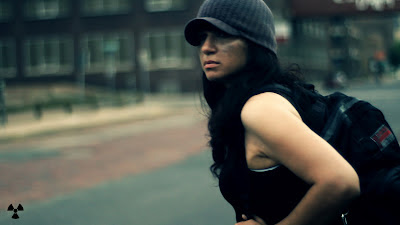 Nicole put her time in on low budget horror and genre gigs, where her body may have been more prominent than her other, developing talents.  She had her own understanding that she would pay her dues to get a foothold in the biz... and then, with the knowledge she'd acquired on the job, and the relationships she built in the Minnesota horror and film scene, she started developing projects under Triwar Films and Deadtime Productions.


BadRonald:   You've been featured in a number of films, as an actress, but now you're also producing and writing? 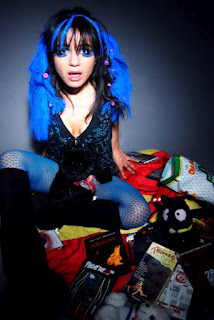 Nicole Kruex:   Certainly!!  Acting is my first love and will always be my goal, but stability in acting is fleeting and often unless you have great contacts or are born into the craft, you have to make your own future.  One of the best ways to do that is to become a producer/writer.  In some ways it seems very narcissistic to be the facilitator to your own future. But then how else are you as a creative able to work your way into bigger and better projects?  I love producing, though.  I love being on set and standing behind the camera just as much as in front of it.  It a great opportunity to learn things from all angles and gives me greater understanding of things I need to do as an actor.  Currently I've produced several projects, one I can link to is a 3 min short entitled, 'The Initiation' directed by Mitchel A. Jones (see below).  That film was fun.. It unfortunately had to be 3 mins, and feels too fast paced to me?  But we are working on a longer cut in our down time. As you can see in the credits, I also edit and run camera, and soon --  Direct! 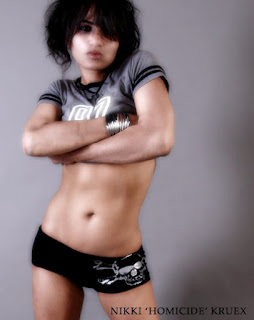 But some are so desperate to just "get a role" we agree to anything from anyone...  Instead, enter a $200 flip phone, iMovie editing, and a script written by a boob obsessed 12 year old.

BadRonald:  Who are your influences, and what films inspire in you in your work?

Nicole Kruex:  Oh gosh, Guy Ritchie, Danny Boyle, Christopher Nolan, J.A. Bayona, Guillermo del Toro, Stanley Kubrick, Roman Polanski, and Neil Marshall are some of my favorite directors.  Heath Ledger, Gary Oldman, Cate Blanchett, Audrey Hepburn, Alan Rickman, Geoffrey Rush... I love horror desperately!  But I'm influenced by the incredible careers of those I consider some of the best in the acting business.  I've found it difficult to find an influence in acting that is strictly horror... but maybe there is a reason for that.  I think the best shoot higher then just horror, but hundreds of them got their start there... look at Jamie Lee Curtis!

As for films, in the horror genre I am most inspired by films with a clever edge or a rawness that translates into something more then "Five teenagers go into the woods".  28 Days Later, The Orphanage, The Descent, The Shining, Rosemary's Baby, The Omen, Poltergeist.  Movies with incredible stories and incredible cinematography.  Movies that create a world for you to disappear into with details you may not catch on the first or second watch.  A lot of films don't reach that pinnacle today because they are too interested in body count, twist endings, found footage, boobs, blood, and gimmicks.  Give me Hitchcock and real people over GQ drunken frat boys "actors" and loose porn star "actresses" any day. 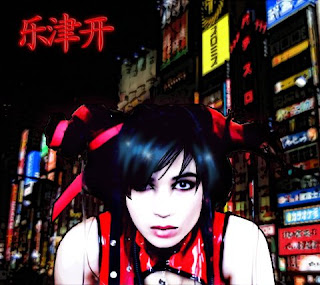 BadRonald:  You had started your acting career taking parts where your body was exploited more than your creative talents.  But then you made the decision to take a vested interest in the business and art of the genre, with writing and producing. How did you balance the two, presenting an image that will attract, while taking control and producing and creating?

Nicole Kruex:  Well, the first step for me was picking and choosing roles and films that made sense for who I want to become. I've made mistakes just to get in the game and quickly realized that wasn't who I wanted to be or how I wanted women to be viewed. I have great respect for doing what it takes... but being smart about it. A lot of girls fall into stripping naked for films with no future. The guy with camera, and zero budget, and no plan beyond getting a pile of girls naked and covered in blood idea... problem is if you really want to be Jamie Lee Curtis, you have to look further then that,.  You have to work, fight for better roles, and do your research on what is going to push you forward vs. hold you back. For me, that meant seeking out things bigger then myself and learning what I needed to do to get there. The balance comes in deciding what was really sexy and what was just slutty. 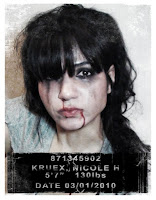 BadRonald:  I liked the humor and commentary of the "Arrested After a Girl Fight" pics on your FB page. What was that all about?

Nicole Kruex:  Honestly? I was having a bad day... but I turned it into a positive thing by finding some humor in my sadness. It became a fun photo shoot.. but in truth, those were real tears.

BadRonald:  Like me, you grew up with horror stars as your idols.  Stars like Robert Englund and Doug Bradley.  And you loved films like Texas Chainsaw Massacre.  But also, you were equally fascinated with the sweeter side of film, enjoying the films of Shirley Temple, Audry Hepburn and Great Garbo. I'm the same way in that I really love performers with sort of duel personalities -- balancing darkness and light. I love Johnny Cash for his soul, but also his demons. I loved Burl Ives and Andy Griffith for their child friendly work, but also the twisted turns they gave in movies. Also Jimmy Stewart.  Do you also enjoy those dark shadow you see in the "goody" entertainers?

Nicole Kruex:  Absolutely! As an entertainer you can't be just one thing... All actors have just as much light as they do demons, it's those demons that cause the changes in attitude needed to give a realistic performance on camera.

BadRonald:  Thank you Nicole.  Best of luck on all your projects.


Check out more on Discursion here.
Posted by Bad Ronald at 6:54 AM