There are a lot of movies that can be just dismissed as eh, didn't float my boat.  Which doesn't necessarily mean they're bad, just that they weren't that great, either. You know... kinda okay.  But, sometimes, within that neutral category, there's the occasional film that, although it wasn't so great itself, gives a hint that whomever made the movie just may be onto something greater. This is where I would place Deer Crossing, or rather its director Christian Grillo. 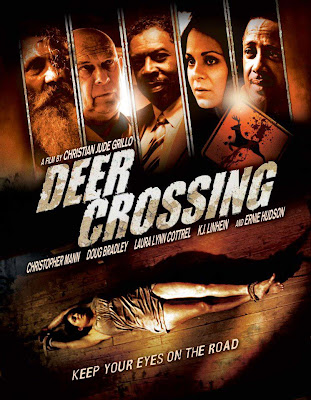 Grillo's got a pretty twisted sensibility.  Wicked, actually.  Deer Crossing is full of subversive behavior and nefarious characters. There's an eloquent speaking backwoods killer, a tormented father/husband who neglects his selfish past, an eye-patch wearing creep, and a naked lady chained to a railroad tie. There's incest, sodomy, drugs and rape. And what's impressive is that Grillo shows great restraint, keeping Deer Crossing from delving too deeply into these exploitative cliches, separating his film from the pack of other low budget indie horror.

There are some terrific action sequences, as well.  Grillo has an eye for good action pacing, getting plenty of fast moving coverage to keep the action scenes alive and running. Some of these sequences easily could stand up to Hollywood standards.

The downside is the slower parts of the story.  I love one take dialogue scenes.  They're great moments for the audience to be a fly on the wall, watching some real moments between characters. But, like a good photograph that fills the picture with negative space or peripheral information, a one take filmed scene needs to engage the audience with equal information, or non-information.  Unfortunately, some of the dialogue scenes in Deer Crossing demonstrated a need to edit, to throw out the uncomfortable actor's pauses, as much as some of the superfluous dialogue. 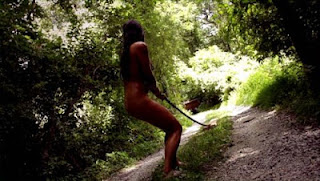 It also suffered some from too much going on. Christopher Mann (The Wire) does well, but his troubled detective character ultimately takes away from what should be the focus of the film -- Michael Chancelor (Warren Hemaway), the father, whose self indulgent ways lead to crippling guilt, after the kidnapping of his son and wife.  Both Mann and Hamaway play characters who deal with terrible losses, but their stories split the emotional cache of the audience.  The story of a father of a kidnapped boy seems, to me, to create more impact. 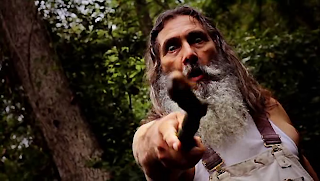 Speaking of Christopher Mann, you have to appreciate the casting in Deer Crossing.  Besides Mann, they brought in other notable names, like Ghost Buster Ernie Hudson as a frustrated police captain. And the big casting coup is nailing down Pinhead himself, Douglas Bradley as, of all things, the small town Sheriff!  It's an unexpected choice, but it works despite the unlikeliness.  The casting of the backwoods killer worked well, too. The intellectually sounding killer is an old thriller staple, and an overripe one at most times.  But, with K.J. Linhein as the Santa bearded redneck with a baritone voice, the role of the backwoods killer became uniquely memorable. Another seeming bit of odd casting was the role of the highly regarded child specialist, called in to work with the kidnapped boy.  By standard ways, you'd expect a person of such importance, as to be helicoptered in, to be this eloquent Harvard influenced stuffed suit.  What we get is Olivia Brice (played by Carmela Hayslett), an auburn-haired, tough talking girl, who isn't there to play nice.  Like with Linhein sounding more intellectual than hillbilly, Hayslett keeps (what seems to be) her strong Philly accent, sounding more street than high society.  It works, because it shakes off what we were expecting. 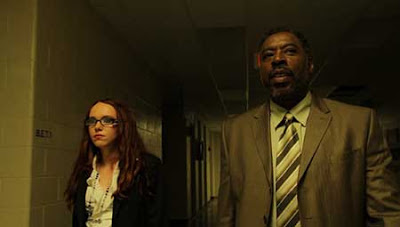 Overall, I really dig Christian Grillo's vision, and willingness to go there, more than I wholly appreciated this film.  He made some good directional choices, but I would like to have seen the film streamlined, rattling off at about 90 minutes of face paced thrills.  Regardless, see this movie.  It's subversive and twisted.  And, more importantly, you need to watch Grillo.  He's got danger in his mind.  If'n he keeps it up, he might become something of a Ketchum or a Laymon of the genre movies.
Posted by Bad Ronald at 1:36 PM