A Grim Tale of a Grim Feast 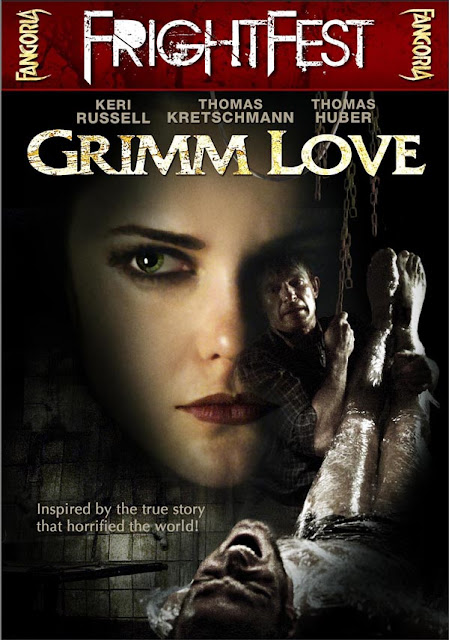 In 2002 Armin Meiwes (known popularly as the Rotenburg Cannibal), was convicted of the manslaughter of fellow a fellow German named Bernd Jürgen Brandes. Meiwes was looking to have a cannibalistic experience, and Brandes was looking to, well... get eaten.  This was shocking in and of itself, but what most captivated the world was that the two had met on an Internet chat room for wannabe  cannibals.  The darn Internets!  Wouldn't the world be a safer place without it!!

In this fictional account of the story, Keri Russell plays Katie Armstrong, an American student studying criminal psychology in Germany. For her thesis, she chooses the notorious case of Oliver Hartwin , a man fixated on the idea of eating another human being. Via an internet chat board he found a willing volunteer, a young man Simon Grombeck.  Katie, herself, soon becomes obsessed with the case and immerses herself in it at all expenses of her own well being.  But why, we don't really learn.
Through a series of flashbacks -- done partly with an annoying old worn 8mm film look (even though none of their childhood was captured on film) -- we learn of how nasty parenting and sadness shaped these two men into the desperate, pathetic and degraded men they grew up to be.  It's almost like a love story, that these two lost souls came together, almost cosmically, as if they were meant to.  I mean, how often have you thought Gee, I wish I could find someone who would let me eat them.  I mean seriously let me have, not just a nibbly, but a whole meal! And then, poof! There he is.  Like fate, baby.

The story of Oliver and Simon (played brilliantly by both Thomas Kretschmann and Thomas Huber), itself, is quite riveting.  So, it begs the question of why the movie needed the Keri Russell character.  As Katie runs here and there, investigating the lives of her subjects, and what drew them separately to perform such unspeakable acts together, we never get a glimpse into what drives Katie.

We see her often check herself in the mirror, examining the anguish the case has brought to her.  We hear the phone message from a friend who worry she has become unsafely drawn to her work.  But, Katie is never in any danger from anyone, not even from her own sanity.  The only obstacle she crosses are people who despise even the name of Oliver Hartwin, and won't provide any help.  Even as Katie enters the Internet world of the cannibal wannabes to discover there exists a videotaped account of the cannibal feast between Oliver and Simon, there is no cause for alarm, because one of the very helpful cannibal fans simply drops a copy off for her to watch.  Such nice peeps those man-eaters are.
She watches the video.  She gasps at the moment Simon's penis is lopped off and shared (no Ciante or fave beans necessary).  She sobs when Oliver grants his friend's final wish to kill and cook him.  Katie becomes so upset, so disgusted by the final kill that she smashes the tape apart. But why?  She had delved headlong into the lives of these two people, learning every sordid detail about there lives, coming to know them quite candidly -- but then becomes so morally outraged when they inevitably consummate their bond. Her reaction should have been quite the opposite.  As a student of psychology, you'd think she would come to understand these two people more as human beings, as opposed to monsters.

Like I'd mentioned earlier, this is almost like a love story.  It's the story of a bond between two people who fate has drawn together out of impossible odds.  Screenwriter T.S. Faull developed the relationship between Oliver and Simon with such pathos and humanity (even though director Martin Weisz flashy craftsmanship nearly ruined it all) that I think he may have worried he'd crossed some moral boundary.  This is the only explanation I can come up with for the Keri Russell character.  Katie is there as the viewers guide, so to speak.  She, like the viewer, becomes interested in the sensation of it all.  But then, when it gets deep, she makes sure to let everyone know that, even though she was knee deep in watching the whole mess, she (nor the viewer or filmmaker) will not stand for it. And thus, smashes the evidence of her own obsession.

What a better ending to this film had Katie spoken of her own obsession with the darker side of life, of how she is torn by the moral repugnance of the cannibal act between the two subjects and their almost transcendent bond.  I guess what has happened is the filmmakers couldn't come to terms with the notion that one can learn to understand human nature, while not condoning the cruelty that humans can inflict.

Either that, or they're vegans who despise flesh eaters.
Posted by Bad Ronald at 9:09 AM