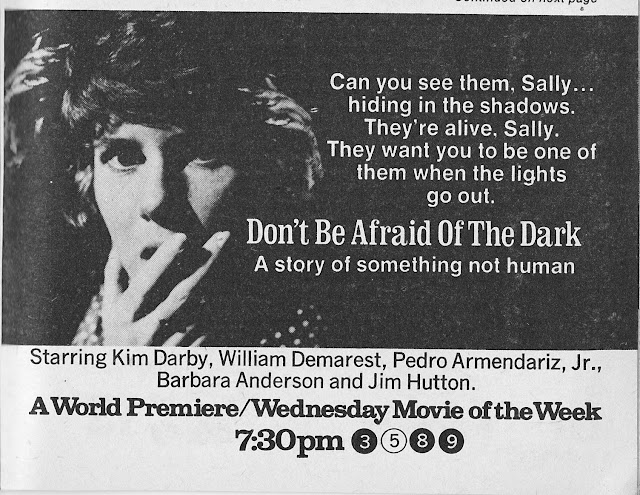 TV Movies used to be a real blast.  And I'm not saying that just because I was present during the heyday of the MOW (Movie of the Week) era, and got to see most of the best on their original runs.  I'm saying it because it's gospel, folks!  These movies had to be good, because they were in direct competition with the theater down the street that was showing The Graduate, The Sting, The Godfather, Deliverance, Planet of the Apes, and a host of other future classics. It would be another decade or so before the TV movie became a joke -- thanks Lifetime! -- but, while it lasted, the golden age of TV movies spawned some real good treats.

One of my all time favorites was this gem Don't Be Afraid of the Dark. 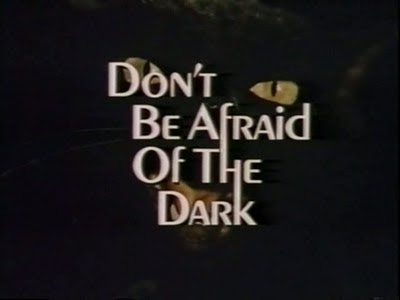 On the surface, Don't Be Afraid of the Dark is a very satisfying chiller.  You've got the anxious young wife, a big old house, a cantankerous caretaker who holds its dark secrets, and a trio of creepy creatures who hide in the fireplace.  What develops is a terrifying little Gothic horror tale that pits a young woman against her own unsettling destiny.

Kim Darby is perfect for the role of Sally, the young wife of a rising young exec (played equally as well by Jim Hutton), who is trying to come to grips with her role in life and in her marriage.  She wants to be the good wife and good homemaker, but she's a young gal in the age of the feminist movement.  Hubby Jim Hutton has his hands full, after reluctantly moving into the spooky old Victorian home his wife has inherited -- not just with the fix-it-up nightmares, but with his wife who is not looking forward to hosting a big dinner party for the partners at work, whom hubby is looking to join.

There is no scripted discussion or overtones of feminism, and Sally never speaks negatively of her marriage role.  But this was the 70s, after all, and the public discussion of women's rights and equality had moved squarely from the back burner to the front burner.  Sally may not have had her bra hanging over the burner, nor was she checking the want ads for a job, but you could undoubtedly sense her unspoken inner struggle.  The fact that this was Kim Darby, the feisty ex-child star, who was cast as Sally, speaks volumes to this, as well.  Darby was precocious young actor who so easily took on the roles of girls who were strong and resourceful -- check her out opposite John Wayne in True Grit -- and she grew into an adult who took on similar strong female roles.  She didn't play the pretty wife or girlfriend, nor was she anyone's plaything.  Her female characters were not to be idled with.  And this is what makes Sally, and her predicament, so interesting.

Well... that and those freaky little walnut headed critters who were after Sally.  I was never prone to nightmares, when I was a kid, but these monsters really flickered some anxious moments at bedtime, after the lights went out and the shadows were long and spooky.
Posted by Bad Ronald at 8:04 PM