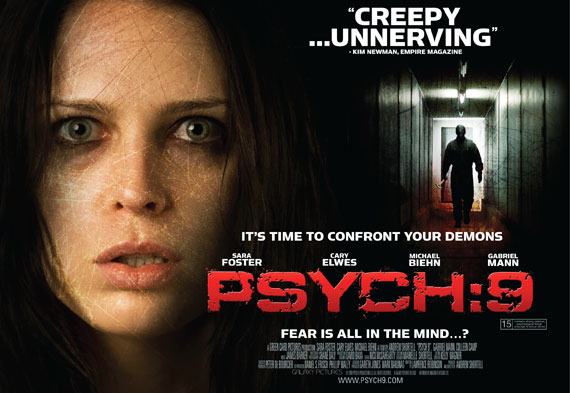 I've grown a bit leary of horror flicks that take place in psych wards/mental hospitals/loony bins.  It's as if the idea that the story takes place where people have wicked hallucinations and massive brain farts, it means the filmmaker has free reign to mess with the reality of the world within the film.  Unfortunately, this is what freshman director Andrew Shortell does.

Roslyn (played by model turned actress Sara Foster) takes a night job in a near-abandoned hospital that has been plagued by a spate of serial killings, perpetrated by the very cliched named killer -- The Nighthawk. Almost immediately, Roslyn experiences a series of disturbing events, which she usually dismisses almost immediately.. You begin to wonder why she gets so frightened by jittery little girls who pop up on security monitors, or strange sounds and visions, but then just carries on.  Cary Elwes shows up to apparently be the guy to whom Roslyn can dump on about her troubles.  He adds no depth or conflict to the plot, so you can easily figure out that he's gonna be part of the twist at the climax.  I mean, why else is he there! What other reason would they have a name actor to play such a seemingly pivot-less role?  Michael Bieihn also shows up as the daunting sheriff who may or may not suspect Roslyn is somehow connected to the murders.
There isn't a whole lot new going on in Psych 9, or anything that you didn't really suspect was going on already.  There are some convincing chills to be had, but the script is too scatter-shot to sufficiently build good suspense.  Characters aren't developed, but rather are placed as chess pieces, designed to distract the audience, or be played as red herrings.  Foster, in her first big outing, is an attractive lead, but without a good director, she's left to deliver a typical wide-eyed performance.
Posted by Bad Ronald at 11:36 AM