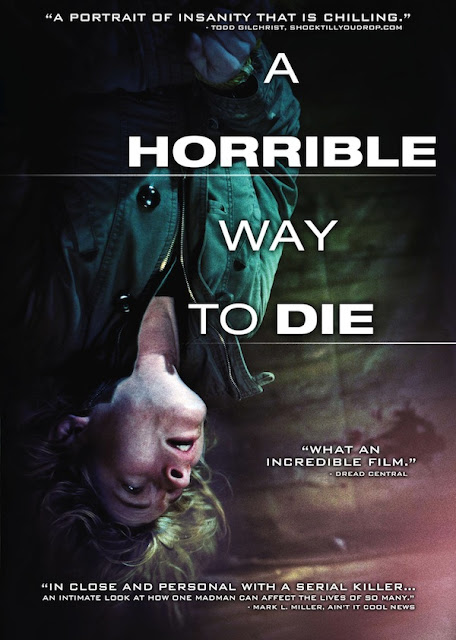 Flipping the serial killer story into a character-driven study of lost lives, Adam Wingard's A Horrible Way to Die is a slow burning, atmospheric thriller that uses mood over effects to convey its misery and horror.

The story follows Sarah (Amy Seimetz), a mousey young woman battling alcoholism and the memories of a troublesome past relationship. Content to hide her feelings within, Sarah still forges a tepid relationship with Kevin (Joe Swamberg), a young man she's met during AA meetings.  In the meantime, we're also introduced to Garrick Turrell (AJ Bowen) an escaped murderer with a media following, whose path is destined to cross Sarah's. Simon Barrett's slow burn script fragments the parallel plotlines of Sarah and Garrick, scrambling time so that their pasts clash with their present, and careen towards that inevitable meeting.

Wingard has taken more than a notice of Henry: Portrait of a Serial Killer, subduing much of the violence to glimpses of the results of Garrick's nasty work, and then peppering in some on screen gore to build tension. The imagery (by cinematographers Chris Hilleke and Mark Shelhorse), as well reflects the muted landscapes of Henry, but is also as inviting, at times, as it is depressing. The images change focus and meander (sometimes to the point of tediousness), never letting the viewer get quite settles in.

However, unlike Henry: Portrait of a Serial Killer, A Horrible Way to Die doesn't feel quite as fully realized.  The performances are beautifully tempered and impressive -- especially Seimetz, who is completely convincing with her downward gaze and hurried, obliging smile -- but the mumblecore mood, which works better for dramas, doesn't create the necessary tension for the thriller inside this movie to truly breakout.
Half the problem may be the twist ending.  There are subtle mentions, through peripheral news stories, of a growing, cult like fan base, who write Garrick letters and mount websites in his honor.  The seemingly nonchalance of these bits are intentional, as to not hint at the big twist in the third act. Nonetheless, the surprise comes off more as a device, rather than cleverly suspenseful.  Wingard and Barrett took great care to not give in to the standard schemes of the horror/thriller genre, with their quietly paced story, and nuanced performances, that the discordant twist flips the climax back to the old standard genre trickery, and cheats the audience out of an ending that would be more befitting to the emotionally visceral character study they'd been enticed by.  I can't help but wonder what a better film this would have been, had they worked more at developing the phenomenon of Garrick Turrell's celebrity (maybe as a social comment) and tying it all into his character and his relationship to his world and Sarah's, instead of simply using it all as a dodge to establish the final twist.
Outside the letdown at the end, A Horrible Way to Die invigorates the notion that horror doesn't have to be bone crushing or loud to be effective.  Mush like some of the slow burn genre classics of the 70s, A Horrible Way to Die is a great way to get your thrills.
Posted by Bad Ronald at 12:36 PM