As a childhood fan of the 60s soap opera Dark Shadows, I was one of those unhappy campers who moaned and shook their walkers at the ridiculous fish-out-of-water trailer, released only a few short weeks before the film's release, and after months of negative speculation of a possible disastrous Tim Burton/Johnny Depp collaboration.  I can't say that I wanted to hate this movie, as so many other DS fans were looking to do.  I actually wanted it to be good.  If not for my own desire to see something good come of my fav television programs (especially after the yawn inducing 90s remake, and the failed 20-ought WB teen-oriented show), but also for the possibility of reawakening interest in this classic piece of pop culture phenomenon. 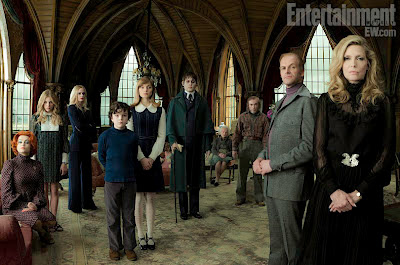 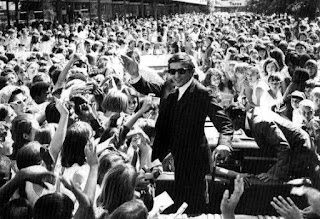 And a phenomenon it was!  Dark Shadows, an afternoon network soap opera, had kids and teenagers swarming for vampires and werewolves long before social media forced them to choose between Team Edward and Team Jacob.  There were board games, cereal box trinkets, comic books, novelizations, Halloween costumes, toys.  And then there were the hit record singles from cast members, television and personal appearances, and major motion picture adaptations.  But most peculiar of all was the teen heart-throb status of Barnabas Collins, the 200 year old vampire who became an overnight sensation after being added to the cast of the Gothic soaper.  Odd because the actor whose image plastered the covers of Tiger Beat mags, and drew the adoring shrieks from teenage girls was a 43 year-old Canadian stage actor, Jonathan Frid.  His craggy complexion and middle-age looks were in deep contrast to the cherubic, smoothness of his fellow idols, Davy Jones, Bobby Sherman or Donny Osmond. 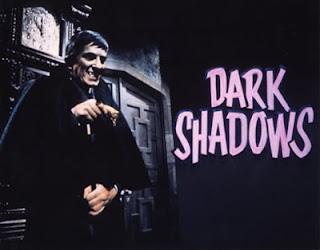 Unfortunately, those days have passed.  Stories with middle-aged characters, who look like middle-aged characters, and act like middle-age characters, just don't become record breaking phenomenons anymore.  That's too bad... And I don't say that because I'm a middle-aged codger, shaking his fist at the young 'uns who've taken over.  I say it because I think that the good stories involve characters of all ages, and shouldn't have to feature just the finest looking, most well dressed and coiffed specimens of human attractiveness.  I mean seriously... God love him, but have you seen Jonathan Frid?  He's no Johnny Depp.

And this is the dilemma that faced the latest resurrection of  Dark Shadows... how to market it to the fickle youth AND to the diehard older fans.  In my opinion, they blew it.  The marketing, that is, not the film. The stranger from another time period schtick has gotten overplayed as of late -- either that, or it's been done too damn well (Life on Mars) by others -- that the corny Brady Bunch Movie gimmick of 70s groovy meets 21st Century hipness in the Dark Shadows trailer shredded the turntable needle to bits. It upset the old skool fans, and bored and confused the newer, younger target audience. 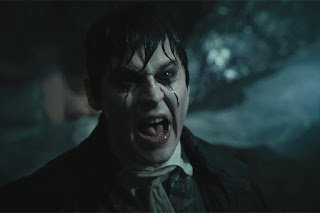 The film, however, I have to admit, was kind of fun.  Hurried, indulgent, overreaching, and scattered... but fun. I don't know that it'll gain an audience, because Burton seems never to find a real focus in the story to make it universal.  He's most likely still smarting from the whooping he took after all but killing the return of another momentous 60s phenomenon The Planet of the Apes. The result is, he made a safe movie.  Part Gothic, part horror, part light comedy, and much too safe.

The film's saving grace -- and I check myself for saying this -- is Johnny Depp.  He would have been the furthest from my choice to play my childhood hero, Barnabas Collins.  But, Depp is, and always has been, a daring actor, unafraid to put himself out there to try something different.  He did a commendable thing by capturing Jonathan Frid's grace and chivalry, instead of mocking it, as I would imaging so many other actors would bow to.  I don't know that I agree with the Nosferatu fingers and pale skin, but a great performance by Depp did wonders for this film. 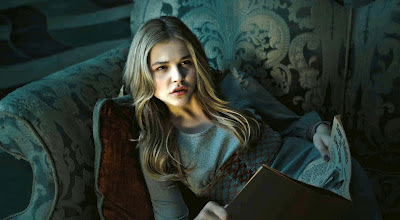 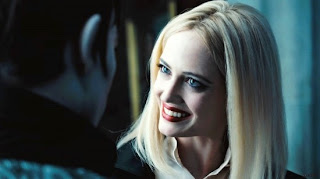 The rest of the cast did wonderful jobs, as well.  I was not buying that Chloe Grace Moretz could pull off the haughty teen Carolyn Stoddard the way Nancy Barrett did on the original soap.  But, she did well by turning in a more spaced out, vapid version of Carolyn.  Michele Pfeiffer matches the stoicism of Joan Bennett, as the Collins Family matriarch Elizabeth Collins Stoddard.  Bella Heathcote brings a nice sense of wide-eyed, innocent sexiness that nicely counters Alexandra Moltke's prudish turn as the virtuous Victoria Winters.  Stand outs would be Helena Bonham Carter's enjoyably martini-doused twist on the overly dramatic Dr. Julia Hoffman, and Eva Green as the delicious Angelique Bouchard.  Green takes the wickedness of Lara Parker's original soap performance, and dresses it up with some shocking red glamor.  Of course, with the good, there is the bad... I was greatly disappointed in the two people who I was expecting greatness.  Johnny Miller is not my ideal choice to play Elizabeth's cad of a brother, Roger Collins, but I thought for sure that Jonny Lee Miller would lay it all out.  Instead, Miller plays the scoundrel with so little luster that he'd not even make a good bad guy on an episode of Charlie's Angels.  The other downer was Jackie Earle Haley as Barnabas's sidekick Willie Loomis.  If any of the characters needed a big performance behind it, I would think it be Willie's. The great John Karlen pulled off, easily, the best performances on the original show, as the demented, sly and troubled caretaker.  He added such a genuine pathos to the character that it endeared you to him, and generated true shock when he went bad.  What a great downer that Haley, who generated similar audience reactions as the child molester in Little Children merely played Loomis as a clueless cast off. 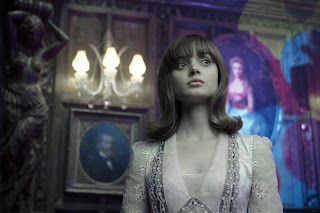 It's not clear why Burton steered clear of the original Bob Cobert theme music.  It's theremin infused, Gothic tone is instantly recognizable and very much a part of the Dark Shadows experience that it's unimaginable that it does not appear at any point in the movie.  Films like Mission Impossible and A-Team and television shows like Hawaii Five-O reused and re-infused their original theme songs with great success.  It's mind boggling why Burton chose not to.  Thankfully, however, he did use some of the terrific music cues that Cobert designed for the original soaper.


It's not the most charged up recommendation I could give for a movie.  Like I say, I was not a big supporter of the remake, and surely not of Tim Burton's involvement... but I did enjoy the movie.  Twice.  I hope that just as Planet of the Apes managed to return to the screen, despite Burton's trouncing, Dark Shadows will rise from the grave, to continue on in much grander form.
Posted by Bad Ronald at 10:09 AM