Be the First Kid On Your Block to Own A Vampire Circus!! 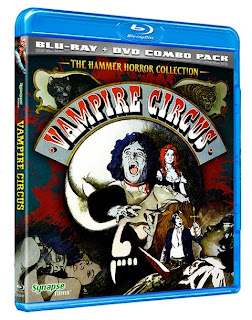 And by vampires, I'm not talking about the pasty white Debbie-downers from Twilight.  Yeesh!  Or the angsty, oh-so-fit hot bodies from Vampire Diaries.  Well... um, yumm!!  I'm talking about vampires that would chew a hole in your throat, rather than chew your ear off with boring chatter about their feelings and bummer stuff like that.  "Oo, but that werewolve's abs are soooo like rippled, and the undead guy's hair is to die for.  Who do I choose?"  "I don't know... If I'm gonna live forever, how am I gonna like update my wardrobe all the time?"  "Oh my gawd -- did you just like kill my best friend?  That's so sweeeet."
No, I'm talking about the creepy, sexy, mod Hammer Horror kind.  The kind that have no problem snatching your kid brother up and taking him to the dark side.  The kind that don't play nice.  The kind that don't have feelings, let alone a heart!!

Vampire Circus is the classic Hammer vampire picture that changed everything.  Christopher Lee and Peter Cushing were icons at Hammer Studios, but the 70s needed a new twist on the vampire lore.  Vampire Circus introduced a new, young generation to a young, hipper blood-sucker.
How To Win Your Copy!!

So... blah blah blah .. Enough of the filler.  Here's how to win your very own Blu-ray/DVD combo of Vampire Circus!!  Simply become a follower of the Bad Ronald blog. It's easy and fun!  Just click on the "follow" button over on the sidebar to the right. Then drop a comment in on this post, lettin' me know you wanna win the movie.  If'n you're already a follower, then good for you -- you're half way there!  Just drop a comment.  Now, if you're not the joinin' kind, and are a little leery of  the cult like mentality of followers... well, then you're gonna have to work harder to win.  Bad Ronald will have to move into your place and live in your walls for a week, and you'll have to let me know just what he'll see, watching through the walls!!  Mwwwooohahahahahahhaaa!   Just click on "follow" and join the fun.  It's soo much easier.


And now the disclaimer:  The Blu-ray/DVD combo Pack of Vampire Circus is provided by the very cool and ultra mod folks at Synapse Films.  The discs are not the retail discs, but early prints for press screenings.  Never fear, though!   Each disc has ALL the goodies on it that you'd get from the retail discs, except there's no fancy image on the disc itself and the packaging is complete.  Winner of the contest will be chosen by a random drawing.  There now... that wasn't so bad.  Was it?