I've got your present for you. It's a pitchfork!! In your back!!! 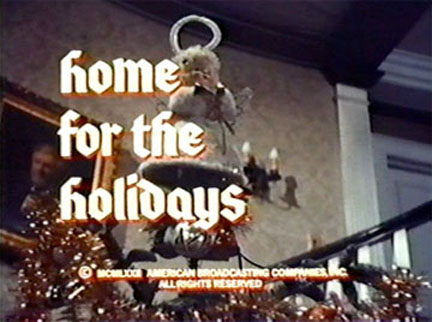 The four Morgan sisters reunite, after nine years, as they visit their ailing father.  There is the youngest, Christine (played by a young Sally Fields, fresh off her run as The Flying Nun), an naive innocent college girl, who still depends on her big sisters; Jo (Jill Haworth) the feisty socialite, Fred (Jessica Walter, who was killer in Play Misty for Me, just a year earlier) along with her bottles of vodka, and Alex (Eleanor Parker) the older, mother-hen spinster.

They've been summoned to their childhood ranch estate by their father (the ever enjoyable Walter Brennan), who is convinced that his new wife (the creepy Julie Harris) is trying to poison him.  Her first husband died under mysterious circumstances, and now the sisters are worried that she is targeting their father's money.  To make matters more difficult, there is a terrible December thunderstorm a-brewing.  Trapped in their secluded childhood home, the sisters keep an eye open for their suspicious stepmother, and open some scabbed over wounds from their own dysfunctional past.

Oh... and let's not forget the maniacal killer, dressed in a yellow rain slicker and boots, and red rubber gloves, carrying a pitchfork!

Produced by the dream team of Aaron Spelling and Leonard Goldberg, this TV Movie is already a must see. But then you throw in John Llewellyn Moxey -- the best TV Movie of the Week director ever(!), well, then you just have a hit on your hands.


I can still remember the first time I watched this Yuletide creeper.  It's probably the first slasher flick I ever watched.  Sadly, though, in the pantheon on modern horror, there is no mention of this small screen gem.  Halloween has already been established as the original slasher flick, and has been widely credited for setting the standards and motifs.  Horror buffs will also look back a couple years previous to Black Christmas, and credit that film for establishing the guidelines for all others.  But, no one ever talks about Home for the Holidays.  Clearly, HFTH is well set in the Made for Television vein, with the old fashioned "ladies in distress" theme, and Gothic thriller overtones.  It doesn't compare to the youthful. angsty and lusty predecessors, with their shocks and sex.  But, check out the killer donned in the slasher style garb!

If we all know one thing about slasher flicks, it's that the killer is always masked, his/her identity hidden from the viewer.  HFTH has that motif down pat, and it predates Halloween by a half dozen years (Black Christmas by two years).

Actually, this argument is somewhat of a moot point, seeing that the Italian Giallo pictures had killers running around in rain slickers and gloves long before Spelling and Goldberg decided to make this film
Posted by Bad Ronald at 7:01 AM