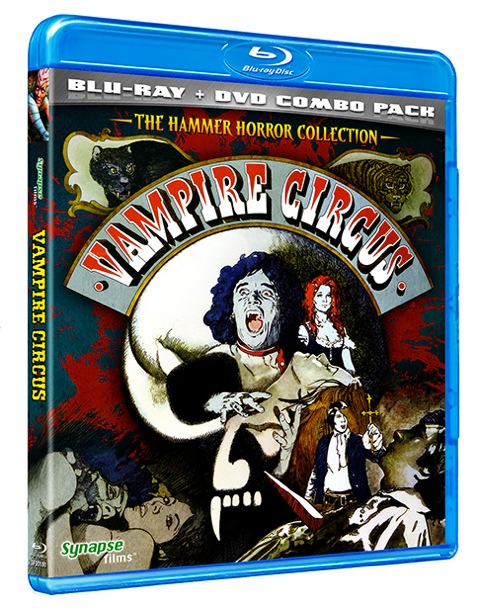 Vampire Circus came about as Hammer Studios was making a change to try and update their image in the film world. It marked a changing of the guard for the producers, as well as the crew of filmmakers.  Gone were the regular faces, like Peter Cushing and Christopher Lee, and in were the new, younger cast members, who would aim to attract the young generation of movie goers.

I first saw Vampire Circus on the afternoon monster movie when I was about 13 or 14.  I had no idea that Hammer was in the throes of renovations, all I knew is that this was a hammer Horror movie, and I wanted in on it.   I'd been digging Hammer ever since I could remember, so I was ready for some good ol' Hammer style mayhem.  But, what I got was a shock to the system.  What I was witnessing on my trusty TV set was not my usual Hammer Horror -- no Cushing!  no Lee!  no Freddie Francis!!  Instead, I saw a new breed of groovy looking kids in the place of my old reliable stalwarts

Don't get me wrong.  I was digging what I was seeing, with this new style Hammer.  I was just freaked out.  After all, I was just a kid, and change don't come so tender when you're struggling towards finding your way around the scene.  I was very used to the strong, silent, mysterious and suave vampires that Hammer used to lay down.  But this new guy, Count Mitterhaus (played by Robert Tayman) was like some twisted, mod art dealer type, looking to score woman (and girls, the slimeball!).  I wasn't really scared by him... I was more sorta creeped out, like in a weird-guy-staring-at-you-by-the-comicbook-rack-at-the-drug-store kinda way.
My mood started lifting once they got into the circus side of the film, especially with the cool nod to The Seven Faces of Dr. Lao funhouse mirror room.  But, then they throw in some super sweet female victims and a tantalizing cheetah lady who seemed to have lost her clothes.  The topper for me, though, was the shape-changing Emil (Anthony Higgins), who leaped through the air and morphed from panther to human.  Cool trick in and of itself -- but the real catch was that he had every female body, at that show, in the palm of his hands.  Now THAT was the kinda vampire I was used to seeing in a Hammer Horror flick.

The version I saw as a kid was obviously the tamed down TV syndicated version, minus the full dosage of blood and skin.  So the treat in revisiting the Circus, some 25 years later, in this awesome DVD/Blu-ray combo pack from Synapse, was to get to see the whole thing in the raw.  What was unexpected was finding all the subtext that my young mind was unable to register on that first viewing.  I hadn't seen more than a handful of foreign films at that time, so the European style influences, specifically the Fellini-esque circus fantasy stuff, was over my teenage head.
What I thought would be just a nostalgic look back at a classic old Hammer Horror turned out to be, really, a good night at the movies.  If I just went by my memory, I'd have ranked Vampire Circus as one of the mediocre Hammer films.  After this viewing, though, I'm marking it up there with one of the tops.  Watching it with a more experienced eye helped open up much of the viewing experience -- the European influences, the subtle (as well as overt) sensuality, the subversive undertones (after Count Mitterhaus makes a feast of an innocent child, he then turns to her willing  mommy and says "One lust feeds another.").  Synapse Films also piles on some great DVD extras.  They've taken notice of the cult following, and have given fans more than their money's worth, with a nice doc on the making of this film, as well as the changes at the Hammer house, a short doc on the Hammer Horror mag, and a look at the comicbook made of Vampire Circus, and a great look at the history of the horror genres fascination with the circus.