Why Am I Watching? 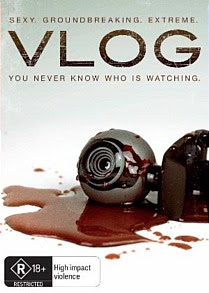 I'm so unbelievably bored watching this movie -- about a chick who video blogs her own murder -- that I decided to blog my own slow, tortuous death.  I think the first clue that this movie would suck is that it's produced by the same guys who brought us Saw. I hate Saw.  Actually, I didn't know about the producers, until I googled the movie and made that discovery.  Surprisingly, the DVDs distributor chose not to advertise that fact on the packaging.  Guess maybe I'm not the only one who hates that movie.

Another clue this movie would suck is the terrible copy on the DVD package.  In part, it reads "Millions watched in horror as popular sexy vlogger Brooke Marks was murdered... during one of her webcasts..."  Seriously?  Millions?  Many network shows struggle to get "millions of viewers."  Blogs don't.  Okay, yeah.  It's fiction, I know.

I'm just gonna go ahead and alert you to some spoilage, here, because, really, this film is so bad that I need to vent.  If you're astute enough to the gimmickry in Saw, then, no doubt, you'll know that there is going to be some kind of twisty plot trickery at the film's climax.  And, no doubt, if you're astute enough to the overused gimmicks of bad horror, you'll easily figure out that Brooke staged her own murder.  What sucks about this, is that Vlog director/writer Joshua Butler so brazingly pulls this gimmick out, straight from his ass, not even bothering to set it up properly, or even realistically.

The first 30 hours of the movie (oh, did I say hours?) show the uncharismatic Brooke Marks talking to her millions of vlog fans, via her webcam, sharing her supposedly interesting stories of loser boyfriends and h8rs who ambush her in public.  One gets the notion that she's suppose to be funny.  She mimics all the ladies from SNL, and spits out dialogue as if it were standup comedy.  The thing is... she ain't really funny.  Or even likable.

Oh, but wait... what's this?  Now she's, um... scared?  Can't really tell.  She's talking into her web camera... something about being scared.  Yes, that's it!  Sorry.  I couldn't tell.  She's acting more like she's watching Benji, instead of video of her exes being slaughtered on her computer screen.  But, wait... I thought she was the murderer, you ask.  Exactly!!  This is the part where I was saying that Butler was lousy at setting up his big twist.  Apparently, he couldn't figure out how to have his big surprise twist without anyone figuring it out, so he didn't even bother with the details.  He simply threw it out there, and then back-peddled his way out of it.  We sit and watch the narrative lie -- from the filmmakers POV -- as Brooke gets a phone message from the killer, an then sits down to watch on her computer (with Benji tears) as the killer reveals how "he" murdered everyone.  These scenes make no sense once the twist is revealed.  Their only purpose is to not-so-cleverly throw the viewer off the truth.  On top of this, we watch as this male alter ego of Brooke's (who we see follows her around) boldly marches out onto the dance floor at a happening club, surrounded by her friends, and stabs her BFF to death, right in front of everyone... and we're expected to believe that no one recognized her.

I get the whole alter ego thing, and that Brooke is living inside her head.  But, this set up is poorly conceived.  As the audience, we're not watching Brooke's interpretations of what happened, as told through her blog, but watching it as it happens through the director's lens.  Butler cuts the action back and forth, from her vlog entries and the narrative of Brooke's real life, but without somehow tying them together.  His storytelling skills have failed him (and the viewer), whicj lead him to just create a lie of a movie.  What better way to fool the audience then to simply not give them any information, and then -- bam! -- unload on them.  Butler might faired better had he just filtered the story through Brooke and her vlog.  This way, the deception is from the deranged mind of the story's character.  Instead, the deception comes from the unimaginative mind of a poor storyteller.
Posted by Bad Ronald at 9:26 PM