I just came across this very interesting tidbit over at Planet Fury, posted by PF's editor-in-chief Superheidi , in which she points out the small-minded editorial that graces the pages of Fangoria's February edition.  As many of you might know, February marks a fairly new annual event called Woman in Horror Month.  It's a few weeks out of the year where we can celebrate the achievements of woman in horror.  Pretty simple thing to do, right?  But, for Fango editor Chris Alexander, taking 29 days of of his busy year seems to be a groin-kicking hassle (maybe it's that extra day we have, this leap year, that's buggin' him).  This is how he explains it: 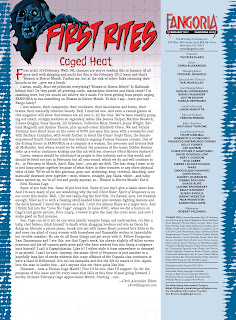 That last phrase says it all.  I'm positive that Chris was trying desperately to sound balls-out hip and disaffected.  But slamming home the point that Woman in Horror Month is trivial because he supports women in horror all year round, with a hearty "eat it!"  Really?  This is how you go about telling women that you support them?

I'm not a Fango reader anymore.  I would read it any chance I could several years back.  But, to be candid, the magazine got to be just another horror fanzine.  Lots of blood, lots of effects, lots of eye candy... but no critical discussion.  Yeah, it's fun to see all of that stuff.  But, I guess with my age climbing up higher, I wanted to have a discussion more than I wanted to be merely entertained.  There were other publications that were more than accommodating for that matter.  That's not to say that Fango is worthless, or that having a peek at some girly-curves isn't fun (just look back at some of my own past articles).  What I'm saying is that I think Fangoria has lost its step in the growing need for more discourse.  Horror is a very effective genre, and historically it's been the genre where taboo and hard to discuss topics have sprung from back rooms to the Main Street theaters and into our homes.

I've been a horror fan for my whole life. I've grown to love the genre even more than when I was a kid, for the simple understanding that horror is more than just gore, girls and guts.  There are so many powerful films out there, with messages and commentary that matter.  And many of those films are made by women.  Yet, in the eyes of young horror fans, women are simply eye candy.  I see this at horror film fests I've gone to.  I see it in the classrooms I work in, where teenage boys worship Anime characters for their bodies, and are not even the least bit informed to their plight within the stories.  I do my part to sway their thoughts to something other than the obvious, and discuss the females within the context of the stories.  Sometimes they get it, but mostly they like to have fun.  But, I don't stop trying, just because nature is winning out.  Just imagine if I had the attention of thousands of horror hungry kids?  Imagine all the positive influence that could be yielded.  It would be such a great honor to influence the zombie youth.  Just imagine having that capability.  You know... like Fangoria does.

So, to Women in Horror Month, I say "eat it... up!!"  Check out a  few genre films from Netflix that have women as writer or director or producer (or all, if you can!!).  Read the blogs written by horror chicks who analyze the movies form a female perspective.  Watch some movies with a critical eye, and really look at how the women are being portrayed.  Take a few moments to think about that scene where the young lady is being assaulted or raped: is it exploiting, or titillating, or thought-provoking?  Go ahead, take some time to dig into all of this.  It's just a month!!  Or, to Chris Alexander -- it's just ONE issue.