Writer/Director Matt Reeves doesn't want you to think of Let Me In as a replacement of the brilliant 2008 Swedish import Let the Right One In.  Instead, he wants you to think of it as the American companion piece, that would sit along side the original.  In other words, the original movie gave you a brilliantly understated horror story with deeply etched characters and nuanced performances, but Reeves version drops all that to give you all the blood and CGI mayhem that you didn't get -- or even need. 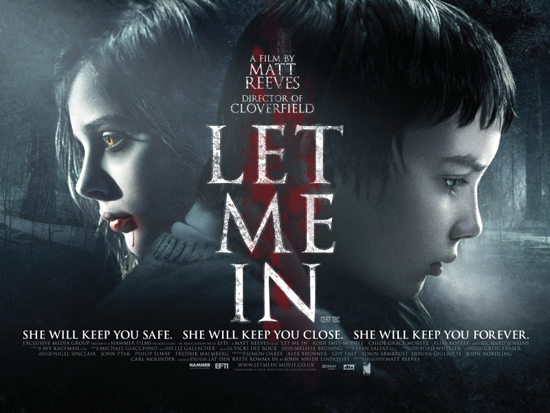 The basics are all there... The bleak Swedish snowscapes are traded in for a wintry New Mexico, but the lonely, bullied boy, Owen (Kodi Smit-McPhee), remains.  He befriends a mysterious new neighbor, Abby (Chloë Grace Moretz), who moves from town to town with the man who appears to be her father (Richard Jenkins).  The new neighbors have a dark secret, and it has a lot to do with the bizarre killings that have plagued the small community. In great contrast, though, to the original, there is the inclusion of a police detective (Elias Koteas), who is searching for clues to the brutal murders.

With remakes, there are sure to be changes made to the original.  But, at the pen of Matt Reeves, the emotional underbelly of the original story (written for the screen by John Ajvide Lindqvist, from his 2004 novel) has been ripped away.  It starts with Owen's mother.  She may be just another complicated part of the boy's bigger picture, but in the original story, they had a relationship.  Tenuous and tried, but still very strong.  In Reeves version, she's downsized to the equivalent of a Charlie Brown cartoon parent, minus the mwahh mwahh dialogue.  The boy's father is even more edited.  He only ranks the cliched "Don't have time now, kid -- but we'll get together soon" phone call. The trip the boy makes out to his father's place, in the original, was a much needed respite for the boy, as well as the audience.  And the eventual betrayal he gets from his dad didn't come from simple rejection.  Instead, we got a glimpse of where the boy's weaknesses may stem from.

Reeves worst offense, though, is the removal of storyline that involved Jocke and Virginia.  The characters still remain in his script, but only as victims to Abby's violence.  In the original story, they were much more than simple victims -- they were the true heart behind the story.  The boy and the girl were the main relationship, and the ones that the audience came to care for.  But, it was Jocke's losses and his search for vengeance that really pulled at the audience's emotions.  Jocke was the one who reached out to the girl's guardian, inviting him to join him and his friends.  The attempt only exposed the strange man's painful alienation.  His life had become so much about serving the little girl that he could no longer have friends.  Jocke also lost the most in this story.  He lost a dear friend to the heinous murders, and then witnesses the brutal attack on his girlfriend Virginia. Unbeknownst to anyone, the attack was slowly turning the woman into a vampire, herself.  Her detached behavior, and her eventual death from exposure to sunlight, left Jocke confused and bitter.  He never gave the woman the respect she deserved in life, so he swore to seek revenge for her death.  His search leads him to the girl's hiding place, and this is where the moral dilemma arises.  The audience has invested so much in the little girl's plight, and in the relationship she has forged with the boy.  But, the heartache and anger that Jocke feels are truly genuine.  We know the girl deserves to die for ll the pain, not just of Jocke, but of every person who fell into the wake of the murders she and her guardian have perpetrated.  It's a genuinely riveting scene.  And the man's suffering is felt as we watch him die, unable to requite his love.

All of this emotion is stricken from the script, and replaced by the well worn chestnut of a police detective, hot on the trail of the killers.  There's no attachment between the character and the audience -- he's just the guy who is trying to catch up to the girl and her guardian -- so, when the detective finds her hiding place, he becomes yet another victim.  Reeves makes a huge misstep when he attempts to draw emotion out of the detective's death, having him reach up towards the boy for help, and into the camera lens towards the audience.  The moment means nothing, because, after all, when did we ever invest anything into his character?  He was just a cop doing his job.  He had no emotional investment.  The only moment I connected with, in the movie, was when the boy feigns reaching for the man's hand, and instead closes the door.  I chuckled.  And I'm sure that isn't the response Reeves had hoped for.

It's these flat emotional gimmicks that kill the story.  Just as he did in Cloverfield, Reeves tries to control the audiences emotions by dictating what they should feel at any given moment. The subtly in many key scenes from the original are replaced by expository dialogue, as if he saying "Hey, remember this scene?  This is what they didn't say, that I thought maybe you guys were too simple to pick up on."  When the girl asks the boy to verbally invite her in, the boy teasingly doesn't abide. She eventually steps in, and soon she starts to quiver and blood pours from her head and body.  The boy, horrified, learns that the vampire lore is indeed true, and shrieks out his invitation.  The audience understands, from the girl's willingness to put herself through such pains, that she would go to any lengths for this boy. In Reeves world, however, there has to be a conversation about all this, that spills out every drop of sentiment, sapping the real emotion from the moment.

It may seem unfair to compare Let Me In to the original film, or the novel.  But with the remake coming barely two years after the original, the filmmakers are clearly trying to capitalize on the popularity of Let the Right One In by pumping out an "Americanized" version.  And if you listen to Reeves and his producers,however, in the DVD's extra featurette, they'd have you believe that their film bears no connection to the original.  Not once do they mention it.  Reeves does talk about Lindqvist and his novel, and of how he has a special connection with the author, and the producers boast of how Reeves always carried the book around, all as if it was the novel that drew them all into this project. It doesn't matter that Reeves had swooned in past interviews that he'd fallen in love with the story after seeing the original movie, and that he at first thwarted the remake, because he felt the movie had already been make perfectly.


One of the other absurd declarations Reeves makes is that he wanted to push the envelope even more than Lindqvist did in his film adaptation.  He looked to the character of The Father, played by Richard Jenkins.  First off, it was far too easy to cast Jenkins.  It's one of those casting coups that, no doubt, got the production office all giddy.  The task, however, doesn't end with the casting.  Jenkins is brilliant at his job, but he's left to try and draw the emotions out of a character who has really no screen time to develop.  As I mentioned before, the opportunities to interact with anyone besides the girl and his victims, is missing.  And the promise that there would be some real shocking moments with The Father, that pushes beyond the pedophilac undertones of the original movie were left flat (probably die to the squeamishness of the studio suits).  There's actually so few moments between the girl and the man, and nothing between them amounts to much.  Reeves button pushing even takes a big step backwards when it comes to that ultimate shock moment -- the revelation of Abby's secret and questionable sex.  In the original, the boy catches a very brief glimpse of the girl's disfigured  privates.  This seems to shed some light on her constant reminders to the boy that she is "not a girl." In Reeves telling, there is no revelation.  The declarations of upping the ante on shock had petered out.  It appears that Reeves was too consumed with his chances to create big budget action scenes that he forgot to work out some real shockers.

Beside all of this, Let Me In begs comparison to the original, because, as Reeves said, the story was told perfectly already.  And, also as Reeves said, Let Me In is simply a companion piece to Let the Right One In.  It would never stand alone as a singular film, for it relies too heavily on what the audience has already gleaned from the original.  Reeves took no chances with his retelling, and despite his declarations that he would amp up the suspense, he had simply poured on the effects.  Some effects were a treat for the eyes, but he missed the point of the original -- that subtly and nuances built the suspense much better.  It's as if he fell in love with the movie, and then forgotten what it was that made it all work.
Posted by Bad Ronald at 10:53 AM