As I've mentioned before, I'm not that into big FX movies. So, why the hell am I looking so forward to seeing Piranha 3D?! I haven't even cared to see a 3D flick since I saw Friday the 13th: 3D... well, maybe that explains it. I still don't have a desire to see Avatar, and I probably never will (I've barred anything with James Cameron's name on it from my life). 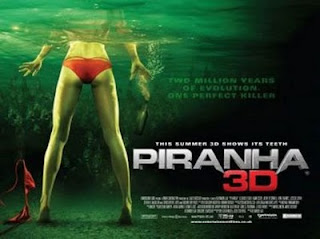 Oh wait... I think the reason why is coming back to me. Kinda reminds me of another movie poster... 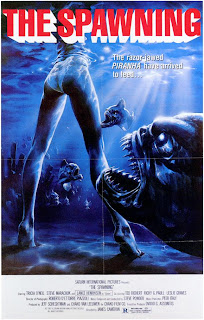 Oh yeah! That's why I went to see this flick as well. Monsters and bums! What a good reason to slap down some hard earned bucks at the local bijou. [Yes, I know Cameron was one of the directors of this film]

I gotta admit -- and I'm sure I'm not the only one here -- that my adoration of these genre flicks was nourished by their marriage of gore and girls, or more specifically girl's bods. As far as I can remember, pretty young things and nasty ghoulish things were linked, arm in bloody arm, doing the Thriller skank.

I've been watching movies all my life, and I was proud to have known the names Roger Corman, Samuel Z. Arkoff and William Castle since I was a spit in the pants. I could tell a Hammer Horror from an Amicus flick before the opening credits rolled. I saw every Vincent Price frightening flick before I was 10. And the image of Raquel Welch sporting a fur mini skirt from One Million Years B.C. was hanging from my bedpost quicker than I could rip it from my older (and very pissed off) brother's Famous Monsters of Filmland magazine.

Yes, sultry skin and torn flesh have made me who I am today. So, no bother that James "Dickweed" Cameron is the new Godfather of 3D -- I'm going to see the "feels like I'm there getting laid and having my skin chewed off" spectacle of Piranha 3D in a theater.
Posted by Bad Ronald at 9:41 AM