BAD RONALD: First off, this film looks like it'll be friggin' balls out.  So many films and filmmakers want to make these kinds of films, but they end up being metered and overly directed.  To me, the beauty of these kinds of films are their imperfections... meaning that the filmmakers aren't trying to adjust the mold by tweaking what they've seen in other films, and expecting their work to rise above.  I like the films where you can see the filmmaker taking risks -- real risks.  Where did this idea spring from?
JAMES BICKERT:  Hey, thank you very much. DGN! is balls out. It could also be classified as an action film. [laughing] I’m addicted to the drive-in and growing up in the south you would often catch some pretty interesting regional exploitation curiosities. Most of the biker films we saw were California based and I wanted to create something with a Georgia flavor that was more antagonists driven than anti-hero. When I was young the Pagans and Outlaws were terrorizing the Southeast and they didn’t look like Peter Fonda or Adam Roarke! As a snot nosed kid, this fascinated me.

Bigfoot has always been a staple of ozoners so it seemed a perfect match. The characters and their dialog all represent a larger theme working throughout the film but that element is purposely overshadowed by the insanity of the action, sex and violence. I made a conscious effort to shy away from any crazy post 70’s style camera setups. There are some experimental shots but they are more in the realm of 60’s LSD and Biker cinema.

Why shoot film?  And was it a difficult route to take, budget wise or otherwise?
Since we were making a lost drive-in film and not a 42nd street homage, I didn’t see any way digital would look correct for the period. It was important to me that the final film looked remastered instead of put through a blender. Luckily producer Nick Morgan agreed with me and worked some good deals with Fuji. I can’t say enough great things about their Vivid film stock. Shooting film isn’t a time constraint when you have Jonathan Hilton (cinematographer) and Dave Osborne (gaffer) but it does eat a budget. The only way to compensate is to preplan shots and hope everyone remembers their lines. (laughing) RED cameras are great but there is a different feeling of satisfaction that film brings. The look is more natural and almost becomes a character itself. Especially when you have as much female nudity as Dear God No! I‘m now dying to shoot exploitation in 35mm. 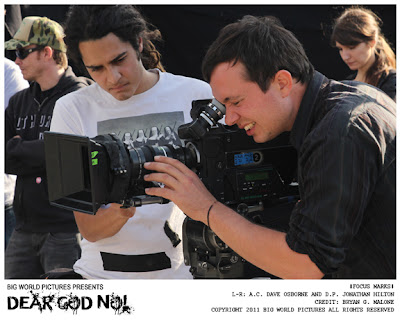 Who are the filmmakers you look to for inspiration -- not just in genre, but in all aspects of storytelling and film technique?
Roger and Gene Corman are the biggest influences. If they produced a movie in the 70’s, I had to see it. If it meant watching it without sound through a drive-in fence so be it. They delivered thrills and I had to have it. Executive Producing a film is such a complex time consuming process and the sheer number of productions they had going at a time is jaw dropping. There are so many influences when it comes to technique and storytelling. Monte Hellman, Larry Cohen, William Girdler, Luis Bunuel, Jack Hill, Terence Fisher, Don Siegel, Seijun Suzuki, Leon Kilmovsky, Jean Rollin, John Carpenter and Russ Meyer. This could take years to assemble. Can we narrow it down to a sub genre like Indonesian flying head movies? [laughing]

You know how it is. As a complete film geek, you get immersed in one aspect of genre film for awhile. I got so obsessed with seeing every film that Filipino actor Vic Diaz was in that I got him tattooed on my leg! How sick is that? There probably isn’t a single person in the Philippines with a Vic Diaz tattoo but this goofball is walking around Atlanta with one.

What is this twisted tale about?
Foremost it’s an Outlaw biker film but it’s also about a socially awkward young girl trying to find herself and flee her oppressive father. She just happens to be stuck in one seriously fucked up sexploitation/action/horror film. We follow her life and the outlaw bikers until they collide. The underlying theme running through the film is pretty complex and personal. That’s about all I can say without giving too much away. Not to worry though, it’s no Twilight or Judy Blume tale. ([aughing] It’s carnage from the first frame.
The Tricky Dick masks... it's like a thing now, from Point Break to Sugar & Spice and Aqua Teen Hunger Force to iCarly.  It's a grand cinema and television tradition.  But NEVER with nekkid chicks and guns!!  What the fuck inspired this bit of pure cinema delights?!
I was drinking beer watching a movie on my backyard drive-in screen called “Three Way Weekend” one night. It had a Forrest Ranger pervert wearing Nixon and Gorilla masks peeping on some young topless ladies. At the time I was trying to think of a way to get some models I know topless in my film without showing their faces. I didn’t want to damage their career but they were the only women I knew without modern tattoos. Then it hit me to make the strip club owner a huge Nixon fan who forced his strippers to wear masks. FX artist Shane Morton also came up with some crazy Mexican monster masks we used as well. The girls had never stripped before so I gave them copies of Orgy of the Dead, Mondo Topless, Cassandra Peterson’s strip tease from Working Girls and some old Something Weird Video go-go loops. It was important to stay away from modern booty shaking and grinding. Still they were not strippers so their nerves were pretty high. After a few shots of whiskey they were fine and some of the masks even came off. They did a fantastic job of catching that era.

Outside the nekkid Nixon grrls, what other surprises are audiences in for?
There’s incestual lesbian rape! (laughing) We have that going for us. I think the biggest surprise for viewers will be how fast paced it is and how many layers there are to the dialog. I always liked that in Russ Meyer and Jack Hill’s scripts. Every 2-5 minutes I also include what I call a “Dear God No!” moment. Something that just has the audience offended, laughing or shaking their head. I try to steer clear of sophomoric humor opting more for subtle gallows humor. Everything is played straight but many scenes contain something pretty over the top. Hopefully audiences will respond well, this is the kind of drive-in movie I’ve always wanted to see. The first half is action/ sexploitation and the second half is horror. You get it all.

What are the plans for Dear God No! -- theatrical releases, DVD/Blu-ray?  Festivals, no doubt.  Any landed yet?
We’ve been accepted to Pollygrind 2011 in Vegas based on the trailer alone so that’s refreshing. I’m working up a screening locally at the oldest Independent theatre in Atlanta called The Plaza and obviously the Starlight Six Drive-In!

Screening in Austin, TX and Toronto is my current goal. We have a few more weeks of post sound mixing. I would love to find a distributor who wanted to invest in a print so I could tour movie houses and better yet, drive-ins! I’m sure it will hit iTunes, Blu-ray, Pay per View, etc. within the year. We’ll keep everyone up to date on our Facebook page and website. 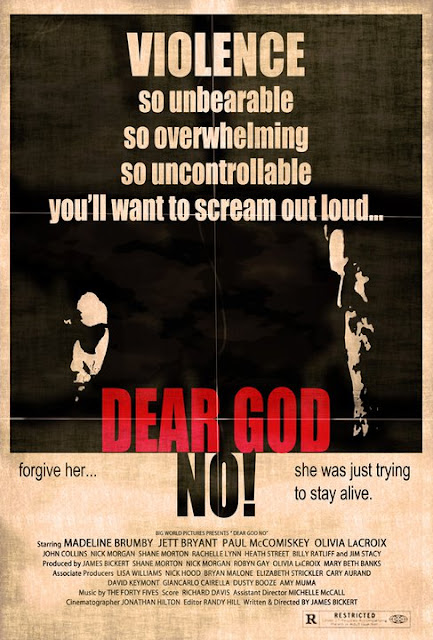 And what's next on your to-do list?
Ultimately it’s to shoot on 35mm and go from a 7 day film shoot to a 20 day. Maybe even add a few crew members. (laughing) I have several 70’s horror hybrid drive-in scripts written. Hopefully the interest in Dear God No! will be high enough to get them into production. I’m dying to get the crew back to the 70’s where we belong.

Any inside scoop that genre fans would like to know, please dish.
I did take two actresses to a very dark place. They seemed really shook up after we wrapped. You never know what kind of past trauma might rear it’s head on set. I’m very easy on actors but something in the script was a trigger once it was performed. It did go too far and that scene has been trimmed down. If Chas. Balun were alive, he would still give us an 8 on the Gore Score. Everyone seems to be doing much better now and the wrap party was legendary. The Dear God No! trailer is playing at The Plaza Theater in Atlanta on June 10th before Hobo With a Shotgun.
Posted by Bad Ronald at 12:34 PM