Sometimes They Come Back... and really ruin the party. 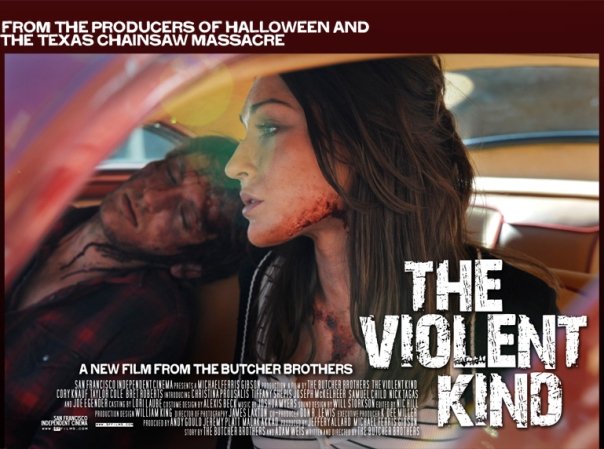 Greasers aren't really good fodder for horror.  Unless you're Stephen King, you might as well leave 'em be -- especially if they start boppin' around like they're at the Prom in the Rydell High gymnasium.  At least King had first hand knowledge of the greased-back hair punks of the 50s.  The Butcher Brothers only have Grease to crib from.

The Violent Kind showed promise at the start.  I'm not talking about the violent love making scene (fully clothed -- for Pete's sake!!) -- seen it before! -- but the scenario that follows, when the notorious biker gang generously help the victims of their recent fist bashing back into their truck and make sure they get back on the road, safely home.  Druggie bikers with a heart -- awwww.  It was kind of a genuine touch.  But, then it got a little too movie-of-the-week with all the in-fighting over honor and friendship (I'm thinking these boys just needed to own up to some undivulged tensions).

And then -- the Greasers show up!!  What in the name of Arthur Fonzerelli is going on here?!  We're at Roadhouse, hanging with the thugs and their ladies, and then some weird wiggly camera effects start happening, and then some flashes of some old newspaper clippings (how obnoxiously cliche!!!), and then -- poof!  The Wanderers show up to crash the party.  Only they've been reimagined by some Cosplay fan at a Rockabilly show.

I'm not sure why Sundance was so smitten by this picture.  My guess is that it was so all over the place -- part Stephen King/part Roadhouse/part They Live/part Grease -- that they didn't wanna admit they didn't know what the hell was going on.  This flick was just plain bad.  The dialogue is pure expository, the acting is misguided, and the story is just plain nuts.  However, it's such the spectacle that you can't miss out on it.