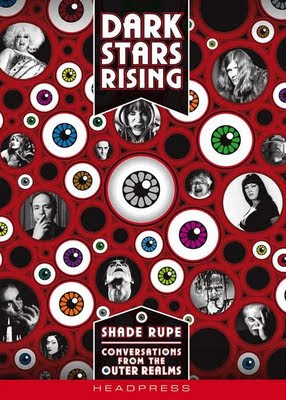 I first met Shade Rupe while I was covering the New York City Horror Film Fest back in 2004.  I had always fancied myself fairly well versed in film trivia -- especially horror film trivia.  However, the day I met Shade, I realized I was just a mere humbled horror-fan wannabe.

I was hunkering down for the 20 or so block stroll from the screening rooms in Tribeca up to the Christopher St. PATH train station to Jersey City.  Shade was heading to his nice warm car, parked about ten blocks away (because, in NYC, you never get to park nearby your destination), and he offered my a lift home.  In that 10-block walk, and the 15-minute car ride to Jersey, we talked about everything from subversive filmmakers, like Kern and Zedd, to creepy made-for-TV movies featuring big-screen throwbacks and man-eating Zuni fetish dolls.[

Following the festival, we had several conversations over the phone, when he'd call, looking to plug a DVD for review.  The plug would turn into a conversation about other genre flicks, or filmmakers, or personalities, and it wasn't long before I recognized that I was outmatched in the knowledge of my favorite genre.  We'd start to talking about a movie, or a particular star, and before I knew it, I had spilled my piggy bank's worth of trivia, but Shade had only begun.  He was an unbelievable wealth of trivial knowledge. He's like those guys from Beat the Geeks AND Jeopardy! all wrapped up into one Frankenstein’s monster–like mashup.

It came as no surprise that Shade had been writing about film, and promoting genre films, for years.  Not only that, but he'd interviewed numerous stars and filmmakers from mainstream Movieland to the obscure names from the world of obscure cinema.  He's like the Barbara Walters of cool interviews.  Yeah, I know -- that was an easy gag.  He's actually more like a Dick Cavett -- more intellectual, and very much more interested in his subjects.  His articles have appeared in numerous publications, and now Shade has put together a collection of his favorite interviews into a book -- Dark Stars Rising: Conversation from the Outer Realms.

Dark Stars Rising is an incredible look into the minds of some of the most interesting creative minds that hang out near the fringes of the film and visual arts worlds.  There are conversations with cult superstars -- like Divine, Udo Kier, Tura Satana, and Crispin Glover -- as well as cult filmmakers  --like William Lustig, Chas. Balun, and Jodorowsky. Shade also digs into the minds of personalities from the more fringe arts, like Richard Kern, Genesis Breyer P-Orridge, and Jim Vanbebber.  There are also some unexpected treats from characters like Brother Theodore -- well, unexpected, at least for me, since I thought I was the only person who knew who the hell Brother Theodore was!!

Shade is a true fan of his subjects, but these interviews aren't a catalog of star-struck fluff pieces.  There's no ego stroking, or Entertainment Tonight kissy faces going on.  These aren't junket pieces.  They're real conversations (unedited, pretty much) which are genuine, sometimes hilarious, often thought-provoking, sometimes shocking, usually subversive, and always insightful. All the subjects are artists in every sense of the word.  They struggle for and through their work.  They're mostly unrecognized in the mainstream.  And they all have the balls to speak the truth... as they see it.

The pieces I found most provoking, were the ones which explored subversive or taboo-busting subjects, and how society treats these issues with great hypocrisy.  Writers and artists, like Peter Sotos and Dennis Cooper, discuss how America embraces violence, and sex, in our mainstream entertainment, but then chastises those who portray these subjects in a more honest fashion.

Shade Rupe has a knack for making his subjects feel comfortable enough to talk about just about anything.  Not in a sensationalistic way, but rather as individuals trying to learn from each other.